Defending champions India take on England in the quarter-final of the ICC Under-19 World Cup 2014 at Dubai International Cricket Stadium. India skipper Vijay Zol has won the toss and India will bat in this knockout game.

Live Streaming of the India Under-19 vs England Under-19  match can be watched free at http://www.starsports.com/cricket/video/index.html?v=1307067.

The match has been delayed due to dense fog. If play doesn’t commence at 10 am local time, the number of overs will be reduced. But conditions have cleared up now. The fog is not as thick as it was an hour ago. The toss will be taken shortly. Meanwhile the rest of three matches too have been delayed due to the fog. 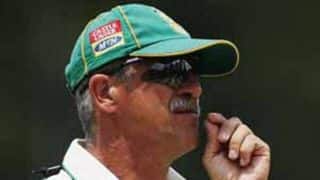