Catch Free Live Streaming of the 3rd Test between India and England here.

India have a daunting task ahead of themselves on Day 3 if they are to win the third Test against England at the Ageas Bowl, Southampton. The visitors were 25 for the loss of one wicket after 14 overs at stumps on Day 2, with Shikhar Dhawan departing early after being caught by English skipper Alastair Cook off the bowling of James Anderson. England had earlier declared their innings at 569 for the seven wickets, with Ian Bell and Gary Ballance posting impressive centuries, along with Cook and debutant Jos Buttler scoring 95 and 86 respectively. India trail the hosts at the start of the third day by 544 runs. Catch Live Streaming of the 3rd Test at starsports.com and live telecast of the match on Starsports. Catch the Live Scorecard of the match here.

The Ageas Bowl, formerly known as the Rose Bowl, is currently hosting its second international Test match in 13 years of its existence. The first ever Test here featured England and Sri Lanka in 2011 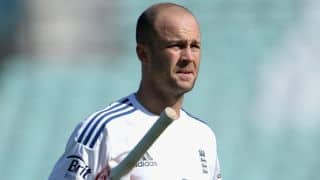