India take on Sri Lanka in the fourth match of the Asia Cup 2014.

India take on Sri Lanka in the fourth match of the Asia Cup 2014 on February 28, 2014 in Fatullah. India and Sri Lanka both won their first match in the campaign. They will be looking to gain the upper hand over the other.

Live Streaming of the India vs Sri Lanka match can be watched at http://www.starsports.com/cricket/video/index.html?v=1308628

It will be a new challenge for a young Indian team, led by Virat Kohli, as they start Asia Cup 2014 campaign with their second One-Day International (ODI) against Sri Lanka at Fatullah on Friday.

India beat hosts Bangladesh by six wickets in their first match. Sri Lanka had beaten Pakistan by 12 runs in the tournament opener. 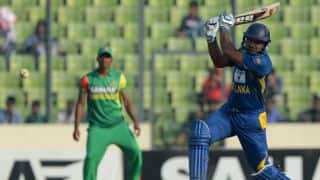