Bailey turned himself towards cover, his back facing mid-on, and prepared to bat during the PM's XI match with South Africa.

Watching from the slip cordon, visiting captain Faf du Plessis could barely sustain his laughter as Bailey turned himself towards cover, his back facing mid-on, and prepared to bat.

Here is the video of the incident:

Faf having a cheeky giggle in the slips at Bailey’s extraordinary stance pic.twitter.com/q30H7chZeP

This is not the first time Bailey has stunned onlookers with a strange batting stance. In 2016, he unveiled a bizarre new approach during an ODI against New Zealand and then during the Sheffield Shield.

…and here’s George Bailey speaking about his stance from the archive: https://t.co/XGMIdJwNhe 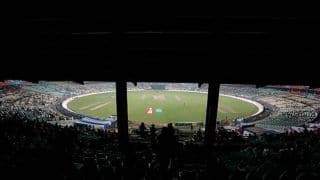