Master with the ball lately, Jasprit Bumrah snapped up a brilliant running catch to get rid of Steven Smith.

The first One-Day International between India and Australia produced some reverting cricket for all to witness. Runs were scored, wickets were taken and catches were dropped. Amidst all this, one saw a blinder by a not-so-renowned fielder. Master with the ball lately, Jasprit Bumrah snapped up a brilliant running catch to get rid of Steven Smith.

Smith deceived by the pace of the ball, went for the dreaded pull shot and holed out at short fine-leg. Smith was unsure of the shot and was caught in between. It was Bumrah after that! He ran and ran hard to get close to the ball and reverse-cupped it minimal risk. More than the bowler, this was Bumrah s wicket to brace glory on.

Smith s dismissal led to Australia s collapse. Warner’s dismissal soon probably sealed it for India. Maxwell did give them some hope by belting the Indian spinners all over the park, but once he was gone, their chances vanished that saw them lose the tie by 26 runs. Bumrah also bowled his heart out, picking 1 wicket giving away just 4 runs. 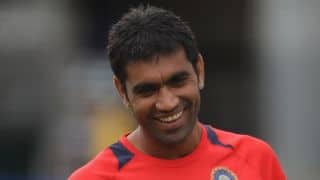