Jofra Archer continued to impress, this time with a hat-trick for Sussex against Middlesex in a Vitality Blast South Group match, at Lord’s. Middlesex needed 14 off the last four balls. On strike was captain Eoin Morgan, with a career-best of 90, from 55 balls. Morgan went for the slog but failed to clear Chris Jordan at long-off. The next ball knocked out John Simpson’s leg-stump. And with the third, he hit the pad of James Fuller with a full-toss, if you forgive the pun.

A masterclass in death bowling, and a hat-trick for Jofra! #SharkAttack pic.twitter.com/ZSTNV5gapX

Archer finished with 3 for 25 and named Player of the Match. He was supported well by England international Danny Briggs (2 for 23), though Sussex’s star import Rashid Khan had an off-day, going wicketless and conceding 39 in four overs.

Earlier, Sussex posted 168 thanks to some big hits from Peter Salt (50 in 20 balls), while the Bermudan batsman Delray Rawlins (49 in 35) shepherded the innings.

Archer had demolished Glamorgan twice last week on a single night under lights in the County Championship, with 4 for 15 and 4 for 31. Glamorgan were shot out for 85 and 88.

Player of the Match: Jofra Archer. 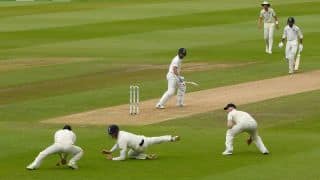