Over the years, Kevin Pietersen has been a reason for nightmares for bowlers around the world but there were a few who gave him jitters too.

Kevin Pietersen played a pivotal role in helping Quetta Gladiators qualify for the PSL 2018 playoffs. However, Pietersen will not travel to Pakistan for the playoffs. Since he had earlier mentioned that PSL would be his last tournament, it means that his illustrious professional career has come to an end. Over years, Pietersen has dominated numerous bowling attacks, but in a video, posted by cricket.com.au, the England star reveals the names of the top five bowlers he played with or against. Surprisingly, the list does not have a left-arm spinner, a discipline KP wasn’t too comfortable against.

While Shane Warne and Muttiah Muralitharan are no surprises, while Mohammad Asif’s mention is a pleasant surprise. Pietersen had once said, “The best bowler I faced was Mohammad Asif, the bowler from Pakistan who got done for fixing,” Pietersen said. “Probably not a bad thing because he tormented a lot of batters.” KP also hailed the skills of his teammate James Anderson, against whom he had a torrid time at the nets; and Zaheer Khan, ahead of the likes of Glenn McGrath. 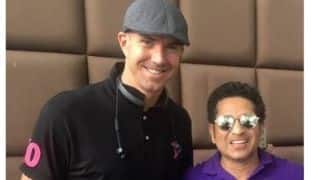