The moment his kids saw their father, they asked where is the trophy, to which Pollard responded that he would show it to them after reaching the room.

Mumbai Indians (MI) star all-rounder Kieron Pollard played a brilliant knock for his side in the match against Royal Challengers Bangalore (RCB). Playing at RCB’s den in M Chinnaswamy Stadium, Pollard played a match-defining knock after MI lost their fourth wicket in the third over at the score of 7. Soon, Pollard lost his partner Nitish Rana in the 8th over and at that stage, RCB had full control on the game.

From there on, Pollard went on to score 70 from 47 balls, including 3 fours and 5 sixes. His knock helped MI chase down 142 in the penultimate over. He could not finish the game as he was dismissed in the 18th over. After the match, Pollard went back to the hotel with his team, where his kids were waiting to welcome. The moment his kids saw their father, they asked where is the trophy, to which Pollard responded that he would show it to them after reaching the room.

Pollard has so far played 110 matches for MI in IPL, which is the second-most by any player of the team after Harbhajan Singh (128). He belongs to the rare group of overseas cricketers who have played 100 matches in IPL. Pollard will be seen back in action in the next game of MI, which will be against Gujarat Lions at Wankhede Stadium on Sunday. 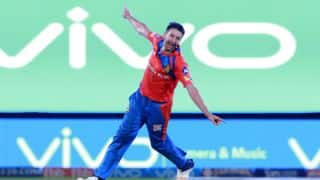