London: Indian bowlers have been outstanding in the limited overs leg on the England tour. They bamboozled the England batters in the T20I series and have continued tormenting them in the ODIs as well. Having bowled out England for a mere 110 in the first ODI, the bowlers once again breathed fire with the ball. If it was Bumrah and Shami in the first game, Yuzvendra Chahal became England’s nemesis in the ongoing game at Lord’s.

England lost the first wicket in the form of Jason Roy who was caught at deep square off the bowling of Hardik Pandya. England had scored 41 runs before losing the first wicket. After a solid start, England’s batting fell like a pack of cards and danced to the tunes of Yuzvendra Chahal who dismissed Jonny Bairstow, Joe Root and Ben Stokes in quick succession to leave England reeling. All the players tried to play the sweep shot to Chahal and perished in the process. While Bairstow was clean bowled, Root and Stokes were given out LBW.

Amidst the carnage, Mohammed Shami also provided India with a massive breakthrough in the form of England skipper Jos Buttler. Shami bowled a corker of a delivery to shatter Buttler’s stumps.

A MASSIVE WICKET FOR INDIA! ?

Captain Jos Buttler is out after a SUPERB delivery from Shami and England are in big trouble pic.twitter.com/Fq0KQJOb5w

England are 148-6 at the time of writing and are staring at yet another below par performance with the bat. Notably, it’s a must win game for them as a loss will give India an unassailable lead in the series. 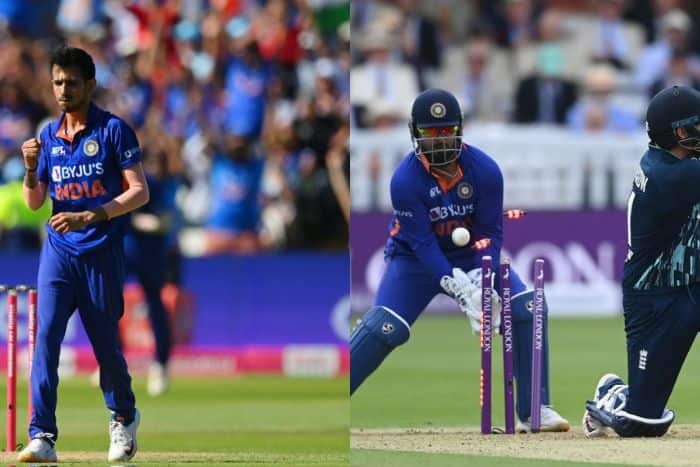