It is notable that Pakistan team had attended a military boot camp with the Pakistan army ahead as a part of their preparations ahead of crucial tour of England.

When Pakistan embarked on England’s tour, nobody gave them any chance against a strong and settled English side. The moment they landed there, their star pacer Mohammad Amir found himself staring at the possibility of a hostile reception at Lord’s, the venue where six years age he was caught and booked for his wrong deeds, and the venue for the first Test.

However, against all odds, the Pakistan team rose to the occasion and did almost the unthinkable. They beat England at their home as well as the home of cricket, a feat they achieved for the first time in 20 years. Their skipper Misbah-ul-Haq led from the front and scored a first-inning hundred, which was marked by a unique ‘salute’ celebration. ALSO WATCH: With Lord’s hundred and 10 push-ups, Misbah-ul-Haq keeps his promise to Pakistan army.

Three days later, on the fourth day, when Pakistan emerged victorious by 75 runs, the team did a similar celebration. Younis Khan marshalled the players and arranged them in a formation of five players in two rows. What happened next was simply unbelievable and pleasantly surprising, as the team broke into five push-ups followed by a salute to the country’s army. Watch the video here:

It is notable that Pakistan team had attended a military boot camp with the Pakistan army ahead as a part of their preparations ahead of crucial tour of England. Afted Misbah had done a similar celebration on reaching his hundred, he had disclosed that it was a tribute to the nation’s army. The victory also came due to vital contributions by Yasir Shah, who took a 10-wicket haul in the match, and the Pakistani pace trio. Mitchell Marsh: Unbelievable to have Allan Donald around 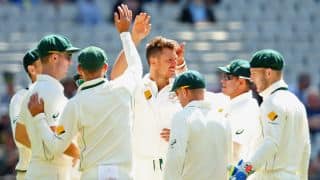