Bowling in the 58th over of the innings to the well-set Peter Handscomb, Jadeja bowled the mystery, rather the weird delivery.

Ravindra Jadeja bowled one of the most unexpected delivery during the second session of the first day s play between India and Australia at Pune. Bowling in the 58th over of the innings to the well-set Peter Handscomb, Jadeja bowled the mystery, rather the weird delivery. Jadeja had completed his bowling stride but the ball stuck to his palm. The ball bounced twice on its way to the batsman. It was way outside the off-stump but Handscomb tried going after it, but the ball moved away from him and he had almost nicked the rank-bad ball to the wicketkeeper’s gloves. Full cricket scorecard: India vs Australia, 1st Test

Wicketkeeper Wriddhiman Saha did appeal but half-heartedly and was joined by Murali Vijay and Ajinkya Rahane from the slip cordon. But what followed later was a series of laughter from everyone including Jadeja who looked amused the way the delivery turned out. Test wickets do not come easy and Jadeja had almost claimed one here.

Handscomb did look dejected for missing the shot but he too seemed to have understood the hilarious part of this incident quickly and was in smiles too. Amidst all this, the umpire Nigel Llong did not call it a wide even though Saha collected the ball well outside the marked line.

Also, Saha collected the ball moments before the ball bounced for the third time, therefore it was not termed a ‘no ball’. Eventually, Jadeja trapped Handscomb plumb on the second delivery of his next over while he was batting on 22.

In 2006, Rahul Dravid was dismissed of poor delivery from the part-time leg-spin of Ramnaresh Sarwan. The ball dropped at the edge of the pitch and spun away, Dravid still managed to get out caught. 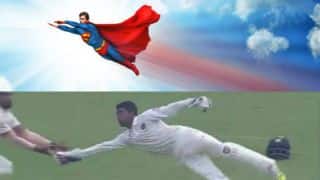 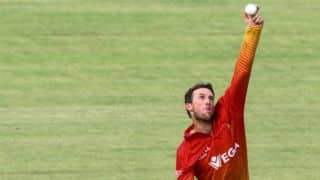