Riding high on their 3-0 whitewash over Sri Lanka, India began the ODI series on a funny note. Sri Lanka were bundled for 216 within 43.2 overs. Rohit Sharma and Shikhar Dhawan began the proceedings for India. All was good until Lasith Malinga came into attack in the fifth over. Rohit punched Malinga s delivery past the bowler as mid-off covered it. However, in a bid to steal a run, both batsmen fumbled. Rohit was in two minds, while Dhawan was cautious. Although the single run did not inflict any damage, Virat Kohli was left in splits watching the action from the dressing room. Even though Rohit managed to escape a run out, he was dismissed in the same over for 4 when his bat came off his hands and he failed to reach the crease on time.

However, Dhawan s ton and Kohli s fifty cruised India to 1-0 lead against Sri Lanka in the f-match ODI series. This was not the first time one has seen Kohli laughing out loud. During the Australia series, Ishant Sharma mocking Steven Smith also left the skipper in splits. Ravindra Jadeja s sword celebration during the New Zealand series saw Kohli laughing and imitating the Saurashtra batsmen from the dressing room. 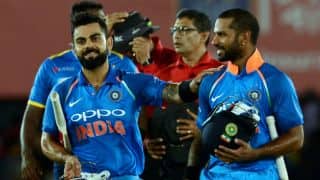