Afridi asked her to hold the flag wide open and with the gesture, won hearts over internet.

Good numbers make you a cricketing legend, but good gestures make you a good human being. Time and again, Shahid Afridi or Lala as, his fans dearly call him has shown his love for neighbours India, and he continues to do so. During the Ice Cricket tournament in Switzerland, Afridi was busy clicking photos with his fans and giving autographs when he came across an Indian fan. As Afridi approached her and she posed for a photo, she folded the Indian flag she was holding in her hands. Afridi asked her to hold the flag wide open and with the gesture, won hearts over internet. Here is the video:

Afridi is one of those star cricketers who are enjoying their time in Switzerland playing the innovative new ice cricket. Afridi also largely spoke about his friendship with Virat Kohli, which he believes he cannot be dented due to the shaky political relation between the countries. 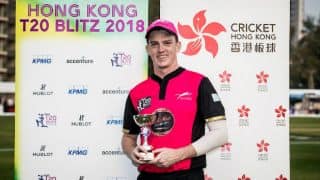