Virat Kohli and co. conceded the three-Test series after losing the penultimate match by 135 runs against South Africa.

Virat Kohli did everything asked for in the just-concluded Centurion Test. He was the only slip fielder who encouraged his bowlers continuously. In addition, Kohli slammed the joint-third highest score by an Indian in South Africa during his 153. Nonetheless, India were a pale shadow of their skipper, losing the penultimate Test of the three-match series to South Africa by 135 runs.

Kohli, someone who isn’t shy of expressing his emotions, was quick enough to point out his team’s flaws, and credited South Africa in the post-match presentation. Nonetheless, a South African journalist irked him in the media interaction later. The reporter questioned Kohli’s tactics of constantly shuffling the playing XI, and whether he would resort to change in ploy after losing his first series as full-time captain.

Note: Kohli has never fielded the same XI in all 34 Tests captained so far. In the current series, vice-captain Ajinkya Rahane is yet to get a look-in.

Later on, while answering another question, Kohli hit back on the South African. He questioned South Africa’s record in India. Kohli managed to have the last laugh by putting out a straight question, “Answering your question sir, how many times did South Africa come close to winning games in India. Can you count?.”

India were in the game before falling apart in pursuit of 287 versus South Africa at Centurion. They lost the series opener by 72 runs. India’s bowling has been top notch, but have been let down in batting and fielding.

The third and final Test, a dead rubber, will commence from January 24 at Johannesburg. 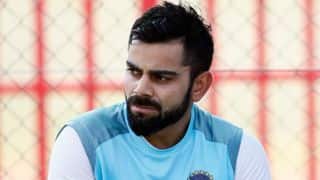