Afghanistan cricketers have many idols from India, and they also play their home games in Greater Noida.

India and Afghanistan have shared cordial relations. The good relationship extends the political borders. Afghanistan cricketers have many idols from India, and they also play their home games in Greater Noida. Now Virat Kohli has praised Afghanistan Cricket Board (ACB) for their efforts and performances on the success of their domestic T20 tournament, which also saw many luminaries from overseas participating. ALSO READ: Virat Kohli reveals Anushka Sharma s nickname

In a video posted by ACB s official Twitter account, the Indian skipper congratulated them on the T20 tournament and wished the national team all the success. Kohli also said, It s been amazing to watch and I ve been always following, to see what you guys have been doing.

Many thanks to Indian captain @imVkohli for his positive outlook on Afghan cricket pic.twitter.com/M6Z5H6eb2r

Kohli also said that though he hasn t been to Afghanistan, he still knows that their vision is strong and he can figure out the passion for this game in the country when he sees the national side in the action.

This will surely boost the morale of the Afghanistan cricketers who reached Hong Kong on Saturday and are set to play the 4-day Intercontinental Cup match. Earlier this year, Afghanistan and Ireland became the 11th and 12th nation to be granted Test status. 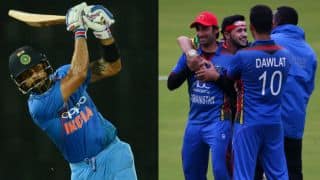