Wahab Riaz showed some brilliant display of his athleticism, when he took an extraordinary catch to get rid of Roston Chase, on Day 1 of 1st Test.

Pakistan‘s speargun Wahab Riaz‘s brilliant display of his athleticism was one of the highlights of Day One of the first Test against West Indies at Sabina Park in Kingston. Wahab grabbed an extraordinary catch to get rid of Roston Chase on Friday. Chase, who was batting good on 63, looked to loft it down the ground but ended up miscuing it high in the air. Wahab from mid off went after it and kept running backwards while keeping his eyes on the ball, and then stretched out both his hands to take a blinder. As he fell down, the motion did take him further, but much to his delight he managed to stop himself just inside the boundary line. Live Cricket Scorecard, Pakistan vs West Indies 2017, 1st Test at Jamaica

Meanwhile, West Indies finished Day One of the ongoing first Test at 244 for 7 against Pakistan at Sabina Park, Kingston. Bad light forced early stumps on the first Day with 9 overs remaining as West Indies skipper Jason Holder and spinner Devendra Bishoo remained unbeaten on 30 and 23 respectively. Both Holder and Bishoo have added a crucial 55 runs from 68 deliveries for the eigth wicket enabling the hosts to reach the 250-run mark which looked unlikely given the way the hosts started off the proceedings. Full Cricket Updates, Pakistan vs West Indies 2017, Day 1, 1st Test at Jamaica

For Pakistan, Mohammad Aamer remained the best bowler picking up 3 wickets conceding just 28 runs in his 19 overs. Spinner Yasir Shah picked up 2 wickets while debutant Mohammad Abbas and Wahab Riaz took 1 wicket each. West Indies began the last session with 143 runs on the board having lost half their side. 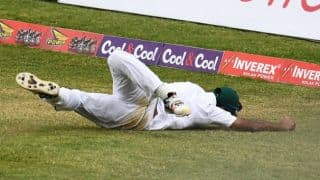