Having taken 2-0 lead in the three-match series, Kohli sent a strong message to South Africa, saying his team will be eyeing a series sweep.

India captain Virat Kohli sent a strong signal to South Africa that the hosts will be looking to complete a series sweep after his side handed an innings and 137-run defeat in the second Test against South Africa at Pune on Sunday.

“We are not going to take the foot off the gas in the third Test. We are looking for a result and hopefully make it 3-0. No-one’s going to relax at any stage, that is a guarantee,” Kohli, who also won the Player of the Match award, said at the post-match presentation ceremony.

Kohli added another feather to his illustrious cap when his seventh double century took him past Virender Sehwag and Sachin Tendulkar, who scored six double tons each. The 30-year-old Kohli also became the first Indian captain to hit a double century against South Africa.

“It’s about getting the responsibility back as a captain (on scoring the double-hundred). The mindset is always to help the team and in that process, the big scores come. I think the moment you start thinking about the team, all the pressure goes away,” he said about his mammoth innings.

“I am at a stage in my career where I am happy to be playing the way I am and contributing for my team. Putting the team in a commanding position is the only goal. It’s been a natural progress to have a calm mindset over the years. I have a good understanding at that and hence the muted celebration. You have to look forward to playing against the new ball.”

Kohli was involved in a 178-run partnership for the fourth wicket with his deputy Ajinkya Rahane in the first innings. “I enjoy batting with Jinks (Rahane), he has a great mindset. We communicate and run well between the wickets. We are probably the most successful Indian pair and the only reason is both of us play for the team. We take a lot of pride in that. Having him at the other end, keeps you focussed,” Kohli lavished praise on the Mumbai batsman.

“The good thing is when we started, we were at number 7. The only way was up. We laid down a few things and are all lucky to have this group of players. In the last 3-4 years, it’s amazing to see that hunger for all the guys to keep improving. Saha was back to his best, coming into Vizag you could see he was nervous. Ashwin has stepped up beautifully and it’s guys willing to work hard on those one or two per cent things for the team. It’s been nice and looking at the larger picture the Test Championship, every game has even more value.” 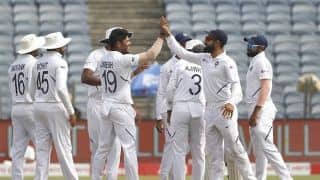