The ongoing ODI series against England might be billed as 'revenge series' for India after the drubbing they received this summer but captain Mahendra Singh Dhoni is no mood to term it that way, saying "revenge is a very strong word in sports". 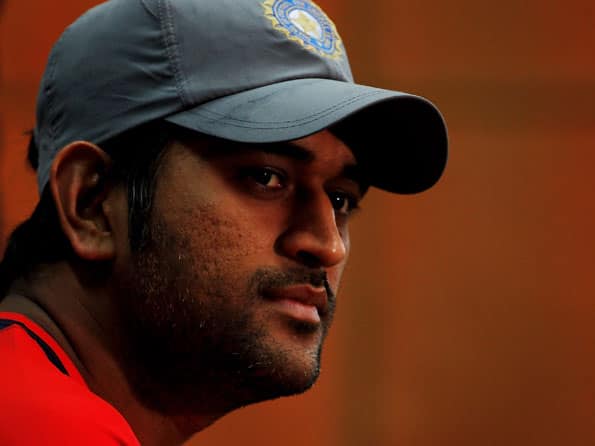 The ongoing ODI series against England might be billed as ‘revenge series’ for India after the drubbing they received this summer but captain Mahendra Singh Dhoni is no mood to term it that way, saying “revenge is a very strong word in sports”.

Whitewashed in all three formats of the game in England, India took sweet revenge by taking an unassailable 3-0 lead in the ongoing rubber against the Englishmen with a series-clinching five-wicket victory in the third one-dayer here.

“Revenge is a very strong word when it comes to sport. I don’t think it should be used in sport. On one side we are speaking about spirit of the game and on the other side we are talking about revenge,” Dhoni said at the post-match press conference.

Dhoni also lauded his young team for putting up a terrific show against a strong England side in the three matches so far in the absence of a couple of senior players due to injuries.

“I am quite happy with the performance of the team when it comes to the ODI format. In England, we made lots of runs, it’s just that we never won the toss and had to bowl last. On couple of occasions, rain and dew factor played spoilsport,” he said.

The Indian skipper said he would keep on promoting young batsmen up the order until they get settled in the team.

They should be batting more than 20 overs. When they become regular part of the side, then we can experiment with them a bit.

When it comes to batting at no 6 and 7, it’s completely different task. Don’t forget that the youngsters who were being promoted are scoring runs. We were missing couple of players because of injuries so no point in thinking about them. We tried to groom the youngsters,” said Dhoni.

Asked about tight finish in today’s match, Dhoni said one more wicket could have changed the complexion of the game.

“It’s not that I don’t show expressions, I always show expressions. It was a close game we should have won easily but we lost wickets in the middle. All of a sudden there was pressure on us. If we would have lost one more wicket it could have been a little difficult to achieve the target,” he said.

“We knew that with me and Jadeja around we can achieve the target. And the dew factor also made it slightly difficult for the bowlers to reverse the ball and bowl yorkers.”

He also had a word of advise for the visiting England side for the remaining two inconsequential matches.

“It’s important to be nice to your opposition team. When you are under pressure you will definitely commit mistakes.

England have five specialist bowlers. As far as talent is concerned, they are a very good side but they need to stick together in the next two games,” said the Indian skipper.

Dhoni also hinted that with the series already in pocket, India might test its bench strength in the next two matches.

“We will see exactly what to do. We are not sure as of now. The team management will sit and take a call. But Umesh Yadav got injured so he is out and one of the bowlers will get a chance. At the end of the day we have to field the best eleven,” he said.(PTI)