Australian pacer Mitchell Starc was overall satisfied with his team's bowling efforts on day one but rued that it allowed India to wriggle out of a precarious position in the opening Test in Adelaide on Thursday.

Australian pacer Mitchell Starc was overall satisfied with his team’s bowling efforts on day one but rued that it allowed India to wriggle out of a precarious position in the opening Test in Adelaide on Thursday.

India were reduced to 127 for six in the 50th over before a gritty Cheteshwar Pujara hit a 246-ball 123 to bail out the visitors who had reached 250/9 at stumps.

The pace trio of Starc (2/63), Pat Cummins (2/49) and Josh Hazlewood (2/52) shared six wickets, while spinner Nathan Lyon accounted for another two as India limped their way on a good batting surface.

“I thought we bowled really well for four hours, probably pretty well for another hour and probably got it a bit wrong at the end there,” Starc told reporters.

“Cheteshwar Pujara batted a lot of time. He’s someone who likes to absorb pressure and bat a long time, and credit to him he scored a fantastic hundred today. I think if you asked us at the start of the day if we’d take losing the toss and India being 9 for 250 at stumps I think we’d bite your arm off,” he added.

The 28-year-old pacer, however, said it is still early stage and they will need to work hard to achieve a win. “You can’t judge a wicket until both teams have had a crack. One good day isn’t going to win a series. It’s going to go a long way to helping win a Test but it’s nothing to win a series,” he said.

It was only Cheteshwar Pujara’s 16th Test hundred that saved India the blushes and brought some respectability to the total, albeit he was dismissed right at the stroke of stumps. “I think we’ve planned and prepared really well for this week and had a lot of vision to look at, and how India have played in the past.

“They did go quite hard (at the ball) but we bowled exceptionally well for the first four hours, especially when the ball got soft and stopped moving around, the scoreboard never got away from us,” Starc said about keeping the run-rate under control.

Pujara was the last man to be dismissed on the second last ball with Pat Cummins’ coming up with a direct throw.

Talking about the run-out, Starc said: “It was a special moment for him, especially after a long day in the field. It was a good little effort from him.”

Australia were brilliant in the field throughout the hot day, and the turning point perhaps came when Usman Khawaja leapt to his left to dismiss Virat Kohli cheaply with a stunning catch.

“Usman Khawaja 3.0 isn’t it? He’s on fire,” Starc said. “He’s made a huge effort over the last nine months I guess and it’s showing in his batting and now it’s showing in his fielding. A great catch and probably one he’ll keep bringing up now as well, so a great effort from him.

“It was a great catch and hopefully he’s going to have a great couple of days with the bat as well,” said the pacer.

Starc also spoke about his change in action that helped him generate movement with the Kookaburra ball early on that troubled the Indian top order. “I’ve been sort of tweaking a few things and trying a few different things with David Saker, looking at perhaps how I bowled in 2015 throughout that World Cup and trying to perhaps get over my front leg a bit more.

“Little things have worked and hopefully the swing that I’ve got the last couple of weeks hangs around for the summer. Just little changes and little cues I used to have that I probably went away from or unknowingly went away from. But it’s nice to see the ball moving around and I think we’ve all been preparing brilliantly for this Test series with a little period off after the Shield game.”

Starc hoped to be more consistent with the ball in the coming days. “Between the batters and bowlers our preparation’s been fantastic, so it’s one good day out of a long series. So hopefully, personally I can keep swinging the ball around and being that bit more consistent than I have been in the past,” he said. 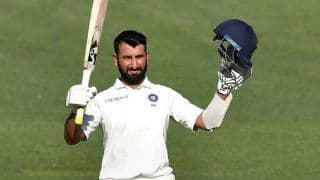