England all-rounder Chris Woakes contended that it was an even battle on the first day of the Trent Bridge Test between India and England. He thinks that England bowlers bowled reasonably well, albeit they could have done better in the middle session, but he credited Indian batsmen for their combative and positive approach which helped them mount a 300-plus score at stumps on day one.

“It was an even day overall, I think. When you do win the toss, and go out there and have a bowl, there’s always that added pressure to skittle them early. But credit to India, I thought they played pretty well,” said Woakes.

Woakes was responsible for a mini-collapse of the Indian top order after they were off to a good start thanks to a 60-run partnership between openers Shikhar Dhawan and KL Rahul. He took three quick wickets – Dhawan, Rahul and Pujara – before lunch to get India in some sort of trouble as they were found at 82/3 at lunch, chiefly because of the all-rounder’s efforts. Thereafter, Virat Kohli and Ajinkya Rahane put on 159 runs, with only one dropped catch in the post-lunch session.

“The ball moved around pretty much all day there was probably a period through the middle when it didn’t do quite as much, when the sun was out, and they capitalized on that. I think we bowled reasonably well, and they combated it pretty well. Throughout that middle period, we struggled to create a chance,” the all-rounder rued the lack of wickets in the afternoon session.

Kohli fell for 97, while his deputy got out after making 81 at Trent Bridge.

“We tried a few different things. But when you come off the back of a game when it’s all happened very quickly, sometimes you expect things to happen. But it’s five days for a reason, and sometimes you have to sit in and be patient,” said the pacer.

Adil Rashid clipped out the wicket of the Indian captain as he was set to get his second hundred on English soil after his magnificent 149 at Edgbaston in the first Test.

“If he (Rashid) could do that when he’s on nought, that’d be nice. But Virat’s a world-class player, so to get him out at any point in the game is important because obviously he can go on and score big ones, go on and get ‘doubles’. So that’s a big wicket for us, and to then get another tonight was important. When I came on I felt like the ball actually started swinging after about 15 overs the lacquer came off and it started moving a little bit more in the air. The wickets leading to lunch were important,” he said.

Rishabh Pant made an electric start to his Test career with a second-ball six (a first in Indian Test history) and more importantly is batting overnight. “He’s an extremely good white-ball player. He obviously comes out and plays his shots, as we saw to Adil today. (But) I suppose in English conditions, you like to think if you put the ball in the right areas enough we might be able to find his edge,” said the bowler about the debutant Indian wicketkeeper-batsman.

Woakes also had a word about his teammate Ben Stokes, who had an average day at the office on Saturday. “There was no real difference in Ben. He’s the same as he always is obviously desperate to do well, desperate to perform for England. He’s one of the hardest trainers in the team. Today probably didn’t go as well as he’d have liked. He’d have liked to pick up a couple of wickets, but that’s the game,” he signed off. India vs England 2018, 3rd Test, Day 2 LIVE Streaming: Teams, Time in IST and where to watch on TV and Online in India 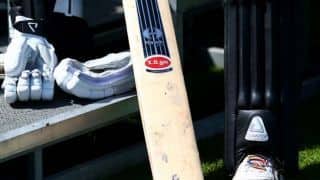 Cricketer banned for one year after headbutting umpire in Hampshire league