Australian paceman Pat Cummins has admitted India have been the better team of the two and that they have justified their no. 1 ranking in Tests.

Trailing 1-2 in the ongoing four-Test series, hosts Australia have one last chance to stop India from changing history as the tourists are just a draw away from sealing their first ever such series win Down Under.

Star of Australia’s fight back in the third Test at the MCG Pat Cummins admits India have been the better team and have shown why they are the top-ranked team in the format.

“We spoke at the start of the series about the record that we’ve got to try to hang onto,” Cummins said on Tuesday. “2-1 is a pretty fair reflection of how we’ve played the series so far, you can see why they’re the No. 1 Test side in the world. Not only at home but they also travel really well.”

“We saw it in England, they played well over here, they just seem to adapt really well. If we can get a win up here and make it 2-2 in the series, I think that’s a pretty good result against the best side in the world, and what is a pretty inexperienced [Australian] side compared to previous years. Everyone’s desperate, everyone knows what the record is and can’t wait to try to rectify what’s happened so far,” Cummins added.

Cummins said India winning the toss played a major role in their eventual 137-run win in Melbourne as they opted to bat when the pitch was more conducive for batting. India declared after posting 443/7 in their first innings but in reply Australia were bowled out for 151, conceding a big lead. The appearance of rough on the third day changed the complexion of the game with bowlers calling the shots.

“I think on day one and two when we bowled the [MCG] wicket wasn’t as abrasive and that makes a big difference. We tried bowling some cross-seamers and it just didn’t seem to scuff up as much as a couple days later,” Cummins said. “Sometimes you get a ball that goes, sometimes it doesn’t, no doubt they bowled really well with it, present a really good seam. And probably more suited to those conditions. To be honest I don’t really remember getting too much reverse swing last summer in the Ashes. I didn’t feel like it played a massive part.

“I know last summer, traditional swing, there was pretty much none. And we thought reverse swing was probably the only way we’re going to get side[ways] movement, and it didn’t really happen at all last summer either. So we know we’re going to be out there for quite a while bowling, it’s a really good team. The wicket’s pretty dry. So reverse swing’s a pretty big factor, especially I’d say for the other two, Joshy [Hazlewood] presents a really good seam, we know what [Mitchell] Starcy does, but it just hasn’t been a massive player so far.”

The fourth and final Test of the series gets underway from Thursday at the Sydney Cricket Ground. 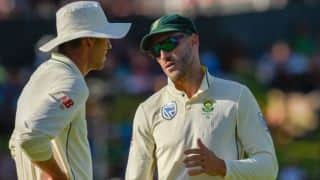