Sri Lanka head coach Chandika Hathurusingha has blamed his team s inability to cash in on key moments as the reason behind their series loss to England. Sri Lanka, chasing 301, were making steady progress at 136 for 3 with Dimuth Karunaratne and Angelo Mathews scoring fifties each, but could not build on their partnership to eventually getting bowled out for 243, losing the match and the series by 57 runs.

The defeat however, has not deflated the coach s confidence and Hathurusingha believes his young and promising side will only develop and improve with time.

“We’re looking at the bigger picture. This is the first series we lost this year,” he said. “We won against South Africa 2-0. In these two games, there were very close games. We had the opportunity to win both games at times. England played better cricket than us. We have to accept that. We have to learn from these mistakes. I think those mistakes we can easily correct. It’s about certain decisions. The skill is still there – that’s what I’m banking on. That’s the hope that I have with this team.

“If you remember this game, I think we lost it in the first innings. When we took nine wickets – the last wicket put on 60, and the way they made runs was disappointing. In the second innings there, were times where we were in the game and we let them off the hook. There was no pressure. Those are the things that are key for us, to win consistently away from home, or at home. Those are the things we need to discuss,” he observed.

The difference between both sides, as per Hathurusingha was their lower order. In both Tests, Ben Foakes scored rallied with the tail to take England to a safe total. He followed his maiden century in the first Test with a first fifty in the second game at Pallekele. Sri Lanka batsmen got starts but no one could carry the momentum forward till the end.

“Both Test matches we got the first five wickets for less than 150, if I remember correctly. There are two things. They batted well, especially Foakes, who was the difference among the two teams in both Test matches. He batted really, really well in these conditions. We need to consistently apply pressure to win Test matches. It’s not easy to have a bad session or a bad spell on these kinds of wickets. Especially on sporting wickets like this,” he said.

On a pitch where 38 wickets fell to spin, the most in the history of Test cricket, Hathurusingha admitted that it was England who adapted better than the hosts. England cracked the code early and used the sweep shot to full effect the conventional and the reverse. Sri Lanka, on the other hand, looked stuck and were mostly using the dead bat to tackle spin.

“I’m not sure who spoke about the pitch before the match started, but this is a turning wicket for sure and we knew that it was going to be turning. It was a good, sporting wicket,” the coach said. “It held up very well all five days, to be honest. I don’t think our guys came with a pre-conceived idea that it’s going to turn – we knew it was going to turn and we prepared for that. There are certain ways you need to play on these kinds of wickets. You can’t play conventionally. You’ll notice both teams played differently. The better team adapted to this and won the game.

“Our failures against spin aren’t a long-standing thing. When I go to a selection meeting, there’s an issue where you have to think about how many spinners are there to fight for one place. We will have to think about that. We felt Rangana Herath’s absence in this match. We played on these kinds of pitches only in the last two series. If you looked at what it was like before, we played on batting tracks. When we had Muralitharan we knew he’d take wickets on anything. When you score on these pitches it’s hard to compare with what batsmen used to score. If the team total is 250 or 290, a fifty is a good score.”

On whether regular captain Dinesh Chandimal will be fit in time for the final Test in Colombo starting on Friday, Hathurusingha said: “He’s [Chandimal] doing a fitness test tomorrow. Then we will get the result. If he passes, most likely he will be available for selection. I haven’t spoken to the selectors because the selectors pick the squad for all three Test matches. I haven’t spoken to them yet about the squad.” 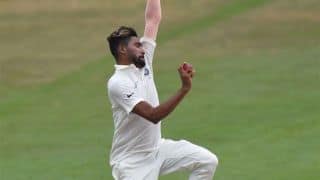 India A bowlers disappoint as NZ A score 458/9 decl