We have come here to win: Samit Patel

We have come here to win: Samit Patel

Having overcome fitness problems which kept him out of England team for two-and-a-half years, Samit Rohit Patel is raring to go in the five-match One-day series against India beginning here Oct 14. 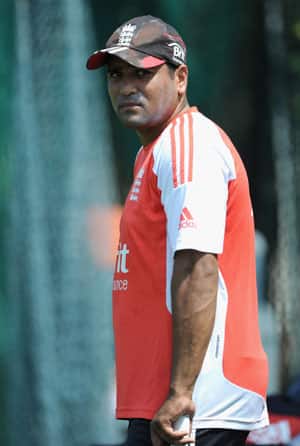 Having overcome fitness problems which kept him out of England team for two-and-a-half years, Samit Rohit Patel is raring to go in the five-match One-day series against India beginning here Oct 14.

The English cricketer of Indian descent, who was out of action till recently despite making his international debut in 2008, is hopeful of a fresh start in India, where conditions may suit the left-arm spinner.

The 26-year-old, however, is aware of the competition he faces to cement his place in the team, which is attracting huge talent.

“Competition is very good in England. It is good for English cricket that we have lot of competition. Hopefully, I should start well and carry on,” said Patel, who traces his Indian roots to Gujarat.

He is looking forward to bowl alongside Graeme Swann, whom he described as the best spinner in the world. Patel, however, knows it is not going to be easy for him as young leg-spinner Scott Borthwick is also in the race to be the second spinner.

Patel, also a middle order batsman who played in India in 2008, feels it would be an advantage bowling on Indian pitches.

After being ignored over fitness problems, Patel worked hard to lose a bit of weight and return to shape during the last two years. He is aware that he will have to keep focusing on fitness. “It doesn’t change overnight, there is a long way to go,” he said.

It was a kick boxer from Brisbane who helped him overcome the fitness issues.

Though happy to be back in the One-day side, the spinner dreams of playing Test cricket. “I am desperate to play Test cricket. It is my dream.”

He recalled he was “very disappointed” when he was left out for the 2011 World Cup. He was included in the 30-man provisional squad and coach Andy Flower had even commented that his style of play would be well suited to the pitches in the Indian subcontinent. However, he was not selected in the final squad of 15 due to persistent fitness problems.

“It is going to be massive. We have set ourselves goals. We have come here to win,” he said on the four-week India tour, which also includes one Twenty20.

Patel believes defeating India at their home would be a challenge despite England beating the same side comprehensively only last month. “It is tough to beat India in their backyard. Not many teams have done that,” he said.

He is also looking forward to revive his family contacts in India. “I hope to catch with some of them in Mumbai,” he said.

His parents, hailing from Baroda in Gujarat, had migrated to England in the 1980s. Born in Leicester, Patel starting playing cricket at the age of 16 and made his first class debut for Nottinghamshire.

Patel, who made his international debut against Scotland in 2008, was part of England team which toured India the same year but failed to impress. He also played three of the five ODIs against India last month. (IANS)