We have the belief heading into the second Test: Henry Nicholls

We have the belief heading into the second Test: Henry Nicholls
By CricketCountry Staff

New Zealand batsman Henry Nicholls said his team are more confident after their close four-run win over Pakistan in the 1st Test, as they head in to the second Test starting in Dubai on Saturday.

“Obviously, it was an ideal start for us to win the first Test and we have the belief heading into the second Test,” said Nicholls who made a fighting 55 in New Zealand’s second innings in Abu Dhabi.

“We bounced back after not an ideal start and found ways in conditions that are foreign to us, so it was nice and has given us confidence heading into the second Test.”

ALSO READ: Pakistan will come back hard, but we hope to do something special: Neil Wagner

“Pakistan will definitely look to bounce back so it’s for us to improve and to assess quickly and adjust at a different ground and different wicket,” said Nicholls.

New Zealand are mulling the option of including a third spinner in uncapped off-spinner Will Somerville. The last time they played three spinners in a Test was against India in Kanpur two years ago. 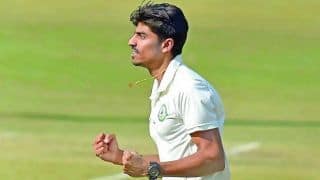 2nd unofficial Test: India A made to toil on opening day against New Zealand A It's a special time to be out there in the middle: Jonny Bairstow on his century