We have the skill and experience to win Test series in Australia: Virat Kohli

We have the skill and experience to win Test series in Australia: Virat Kohli
By CricketCountry Staff

With less than a week remaining before India‘s first Test against Australia to be played in Adelaide, their captain Virat Kohli has said that his team possesses the requisite skill and experience needed to excel this time around. And possibly, return home with a series win under their belt.

ALSO READ: Don’t have to get involved in confrontation – Kohli

In 2018, Kohli has been in charge of the Indian Test team that has lost series in South Africa and England. On both the occasions, there was much fanfare surrounding them as to how they had a realistic chance of recording series wins in those countries. However, the result was opposite.

Despite those results, the top-ranked India are still being touted as favourites against the Aussies. And not just because the home team will be without two of their best batsmen with the shadow of ball-tampering scandal still looming large in the background.

“Looking at how much experience we have gained in the last four years since we have been here, and how the team has played, we definitely feel we have what it takes to win Test matches away from home and, hopefully, this time around, a full series,” Kohli was quoted as saying by the Sydney Morning Herald on Saturday. “We don’t want to have one or two exciting Tests, we want to be able to perform consistently and put in those hard yards every game that we play and not be satisfied at any stage. In terms of skill, in terms of experience, in terms of how we are playing, our mindset, we definitely feel we have the ability to win a series here.”

The last two encounters between the two teams, especially in the Test arena, have given rise to several on-field and off-field controversies. However, in the backdrop of the ball-tampering incident that resulted in a culture review, the Australian team is expected to observe caution.

Kohli, though, expects the Tim Paine-led Australia to continue approaching the game in an aggressive manner. However, he feels there won’t be any heated on-field exchanges as has been a feature in recent times when the two sides have clashed.

“We might not see the stuff that happened in the last series but I think in terms of their body language and the intent they have, I am sure they are still going to be aggressive in their minds, and that’s the way Australia has always played,” Kohli said. “I don’t think there is any other way they like to play their cricket, so I don’t see any incidents happening on the field, I think it’s definitely going to be competitive cricket, they are going to bring their A game to us and expect us to bring ours. We definitely expect stiff competition from Australia as always and we are definitely not taking anything for granted.”

The first Test starts from December 6 at Adelaide Oval. 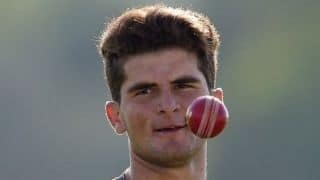 Didn’t expect my chance will come in Tests so early: Shaheen Afridi I don’t find need to get involved in confrontation with Australians: Virat Kohli