Justin Langer has hailed the West Indies' "Calypso cricket", admitting they were his heroes when he was growing up as he prepares Australia to face their current battery of fast bowlers.

Justin Langer has hailed the West Indies‘ “Calypso cricket”, admitting they were his heroes when he was growing up as he prepares Australia to face their current battery of fast bowlers.

The two teams, who have won seven out of the 11 World Cups so far between them, meet at Trent Bridge on Thursday after both cruised to comfortable opening victories.

Head coach Langer said defending champions Australia would need to adjust their mindset to take on the West Indies quicks and other fast bowlers at the tournament in England and Wales.

“We have to adapt to West Indies no doubt, who have got a number of good, fast bowlers. South Africa will be same. England will be the same. Have to adapt our game plan and adapt pretty quickly.

“Obviously a very dangerous team the way they bat and aggressive bowling, but they’ve got weaknesses as well and we’re playing pretty good cricket.”

West Indies, who won the first two World Cups, in 1975 and 1979, were the dominant force in the world game for two decades and boasted a succession of world-class fast bowlers and thrilling batsmen.

“Running and bowling fast. They’re not necessarily going to be bowling the same spot every ball, but going to be exciting to watch. They all try to hit sixes most balls so Darren Bravo’s probably a little bit more unorthodox.

“Always exciting playing the West Indies. When I was growing up they were my heroes.”

Langer described veteran opener Chris Gayle, who scored 50 in the West Indies’ seven-wicket victory against Pakistan, as a “brilliant player”.

“They got a number of dangerous players,” he said.

“With him on the team they seemed to grow a leg. They take confidence from him. Again, hopefully don’t take too much confidence on Thursday.”

Australia were on the end of a thumping last year when England posted a world record one-day international score of 481 for six at Trent Bridge and Langer described the experience as “brutal”.

“Had some really good times here at Trent Bridge and last year was a down,” he said.

Langer welcomed David Warner’s innings of 89 not out in Australia’s win against Afghanistan, his first official international match since completing a one-year ban for ball tampering.

“You can see the look in his eyes,” he said.

“A lot of people are talking. Looks determined. For him to battle through 90 or 80, whatever it was, and to still be there at the end and get the job done for the team, that’s a great sign for us.” 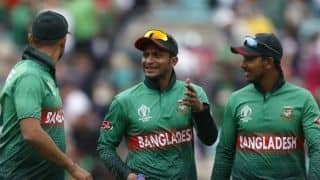 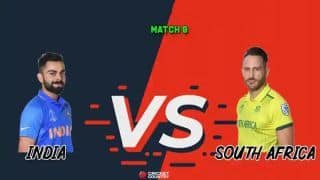