India are coming off series wins against South Africa and West Indies, beating them 3-1 at home and 5-0 away respectively, which is a testament to the rapid strides India have made as T20I unit. Ahead of the Women’s T20 World Cup, India captain Harmanpreet Kaur has asserted that spinners are her team’s strength and that based on their current T20I form, the team will enter the ICC tournament high on confidence. India are coming off series wins against South Africa and West Indies, beating them 3-1 at home and 5-0 away respectively, which is a testament to the rapid strides India have made as T20I unit.

“If I look back two years, India’s 50-over side was doing well and our T20 was struggling. But in the past two years, we have transformed as a T20 team and are very positive going to Australia,” Harmanpreet wrote in his column for ICC.

“When you look at the other teams competing in the World Cup, they’re all looking in good shape ahead of the tournament. All of the teams have strengths but so do we. Our strength is spin. We’re always looking to find a way to integrate spinners into our team and even now, we’re assessing our plans and how we can exploit that strength.

“Our bowlers are always looking for the wicket-taking delivery and when we have our backs to the wall, they produce for us. We haven’t always managed to deliver on our potential as a team and winning games is always about how well you’re able to execute your skills. In recent series wins over South Africa and the West Indies, we played to our full potential and that helped us get positive results. If we give 100 per cent as a collective, results take care of themselves.”

Credit also goes to coach of India women’s team WV Raman, who took over reigns when women’s cricket was in a but of a turmoil with the infamous fallout between Mithali Raj and former coach Ramesh Powar leaking in public. It was in December 2018 that Raman was appointed coach of the India women team after the former three-member ad-hoc panel, comprising Kapil Dev, Anshuman Gaekwad and Shantha Rangaswamy, interviewed nine candidates for the job. And after 13 months in charge, Harmanpreet believes the team has made tremendous improvements under him.

“Woorkeri Raman, our coach, plays a big role too. He was a very experienced player himself and now it’s great to have him working with us. He’s someone who always helps us keep calm in pressure situations and learn how to solve problems together out on the pitch. He is doing a very good job for us and we’re very happy to have him in the camp. His experience will help us in the World Cup,” she added.

India landed in Australia a earlier than other teams to play a tri-series involving them, England and the home team. With two losses and one win, it hasn’t been the best of performances from the Indian team, with two batting collapses emerging as major concerns, but Harmanpreet is confident that they will make the most of being familiar with conditions once they play Australia in the World Cup opener on February 21.

“We went out to Australia earlier than a lot of teams and are in the midst of a tri-series with England and Australia, which will be a perfect platform for us,” Harmanpreet pointed out. “We will be familiar with the conditions over there and that will give us an extra boost to perform well. We’ll also be able to experiment with selection and we’ll look to find our best combination during that series.” 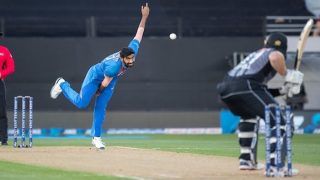