A rampaging Buttler was 'Mankaded' by Ounjab skipper Ravichandran Ashwin and the incident sparked off a wide-ranged reaction across cricket community with custodians of the game MCC doing a U-turn that the Indian did not adhere to 'Spirit of Cricket'.

Rajasthan as a team has moved on from the Jos Buttler ‘Mankading‘ incident and the focus will strictly be on winning their next IPL encounter against Hyderabad here Friday, said seamer Jaydev Unadkat. (ALSO READ: Not in spirit of cricket : MCC backtrack on R Ashwin s Mankad judgement)

A rampaging Buttler was ‘Mankaded’ by Punjab skipper Ravichandran Ashwin and the incident sparked off a wide-ranged reaction across cricket community with custodians of the game MCC doing a U-turn that the Indian did not adhere to ‘Spirit of Cricket’. (ALSO READ:R Ashwin says Punjab competitive and fierce amid Mankad row)

Asked if the team was affected by ‘Mankading’ controversy, Unadkat said: “We haven’t even mentioned it once after that day. We have moved on from that incident. It’s time that we focus on the game coming up. (ALSO READ: I don t want to be Ashwin, says Kevin Pietersen on Jos Buttler Mankading)

“Every game is going to be crucial in a tournament like this. Mankading (controversy) has not really made any kind of impact on us and we are looking for what we can do to win the game tomorrow.”

Buttler looked a cut above rest when it came to attacking the Punjab bowling and Unadkat said that the Englishman alone can’t win the franchise games as he would also require support from other batsmen.

“It (Buttler’s form) actually adds to that confidence. If someone starts like that, people can take confidence and can learn from the way he has been approaching the game. He has been tremendous for us throughout the last season.

“However, there need to be others, who can also contribute as Buttler alone can’t win you games. Yes, him being in prime form is an advantage for us.”

The 27-year-old Unadkat said that at this level, a player needs to have with hunger and passion inside him to step up the game as the unheralded bowling unit is getting a taste of it.

“To step up the game, everyone does it individually. Captain, coaches are there. But at this level, you have to have it inside you. Even if we don’t have as much experience but we have the talent to go forward.”

On a personal front, Unadkat was asked if he fancied his chance of making it to the World Cup squad.

“It’s that time of my career where I want to really focus and enjoy playing each and every game that I get, contributing to the team’s cause. These five years will be my peak as a fast bowler and keep enjoying whatever I am getting to play. I would be happiest if I am selected but right now focus is on winning next game,” he signed off. 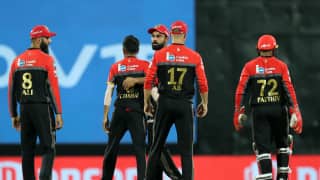