After succumbing to a five-wicket loss to Delhi Capitals on Saturday, Kings XI Punjab captain Ravichandran Ashwin said his team needs to catch momentum and come back on the winning track in the remaining games of the ongoing Indian Premier League (IPL) season.

“This tournament is all about stringing wins together and we need to catch the momentum now,” Ashwin said after Punjab succumbed to their third loss in the last four games.

However, DC, who have had a poor record at the home ground in the ongoing IPL, chased down the target riding on the half-centuries from Shikhar Dhawan (56) and Shreyas Iyer (58*), with two balls to spare.

Ashwin said the total put up by his team was “just below par” because of the dew.

“It was quite hard to grip the ball for the spinners. We lost too many wickets in the middle despite Gayle playing a brilliant knock,” he said.

He also rued the fact that spinner Mujeeb ur Rehman had to sit out because of an injury.

“Someone like Mujeeb is a very important player for us. It happened last year as well, he got a soft tissue injury. It was quite disappointing from that angle,” the off-spinner said.

“But having said we have enough talent to back him up but unfortunately we didn’t have enough runs on the board today. We were giving away one or two soft boundaries and we need to be tight there. If we had 12-13 in the last over, we would have fancied ourselves,” he added.

With five wins from 10 games, Kings XI are currently placed at the fourth spot in the points table. They will next face bottom-placed Royal Challengers Bangalore (RCB) on Wednesday. 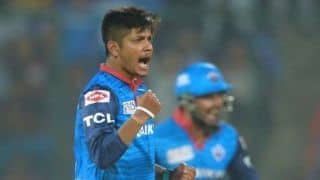