Australian vice-captain Brad Haddin on Sunday said Indian batting icon Sachin Tendulkar's much-awaited 100th international ton is not a concern for his team, which only needs a "bit of luck" to stop him from reaching the milestone in the Test series starting on December 26. 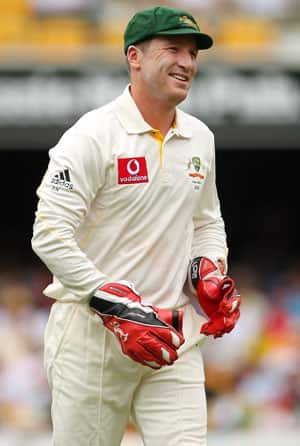 Australian vice-captain Brad Haddin on Sunday said Indian batting icon Sachin Tendulkar’s much-awaited 100th international ton is not a concern for his team, which only needs a “bit of luck” to stop him from reaching the milestone in the Test series starting on December 26.

“It’s exciting, the prospect of him scoring his 100th hundred for the fans and everyone involved in the game. But we haven’t discussed anything about his hundred and with a bit of luck we don’t give the opportunity to get there,” said Haddin during the practice session here this morning.

Haddin was confident Australia has the attack to rip apart the experienced Indian batting line-up.

“We’ve picked an 11 that we think is confident to rip through this Indian side. If you look at the way James (Pattinson) and more importantly the way Peter Siddle has fed off these young guys,” he said.

“He has been outstanding in the last couple of Tests. He hasn’t got the five-fors that the other guys have but this is the best I’ve seen Peter Siddle bowl in Test cricket.

“He has really taken the guys like James under his wing. We’ve got three quicks who are raring to go who can get that radar up around 140 or 145 (km/h),” he added.

The Australian wicketkeeper is equally excited about young off-spinner Nathan Lyon and his prospects for the series.

“Nathan is a work in progress. He’s getting better in every Test. We’ve got to be patient and in the next few years, we’ll see a real quality spinner. He has the temperament to handle pressure situations. He doesn’t seem to get too flustered whether he’s bowling or not bowling. The tempo of his game is very good.”

Haddin doesn’t want to speculate a great deal on the fitness of Zaheer and Ishant Sharma for the Test but says his side has identified areas where they could pressurise the Indians.

“Once they take the field they seem to roll out all right. We know where their strengths are but we also know there are areas we can get the game moving forward and develop the game as quick as we like,” he said.

Haddin hoped the weight of history, of not having won a series in Australia for the last 64 years, would bog down the visitors.

“I hope so. It’s definitely a different place to play cricket for the Indians. But it’s not as foreign anymore. It’s like Australia going to India. We are pretty much used to the conditions now because you spend so much time there. They’ve got some great players and I know especially our bowlers are looking forward to having a crack at them,” he said.

Haddin has been criticised for being overtly attacking while batting and not being judicious in his strokeplay.

“From my point of view, it’s not the swinging ball. It’s just making sure my mindset is just playing at the tempo I play at, don’t try to take the game forward too quick and just react to the game.”

Haddin disagreed with critics who suggest that Australia’s top order is shaky.

“You talk about our inexperienced top three. I think we’ve got a very in-form top three which is good. If we are going to do any good in this series, it’s going to be from one to seven with the bat, we’ve all got to perform. We’ve got to make sure we’ve got our game heads on and ready to go.” (PTI)

Sehwag and Gambhir can trust the bounce on Australian pitches: Chopra