England paceman James Anderson on Sunday showed his team's resolve to stay on top of the Test rankings, but warned they needed to beat Pakistan, India and Sri Lanka in this tough year. 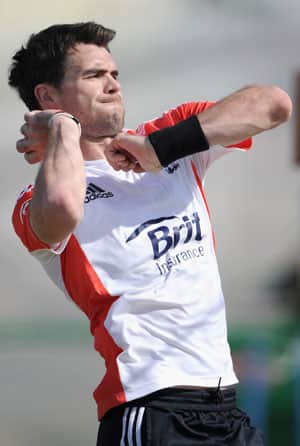 James Anderson, who featured in the first practice game, said the players realise the enormity of the task at hand Getty Images

England paceman James Anderson on Sunday showed his team’s resolve to stay on top of the Test rankings, but warned they needed to beat Pakistan, India and Sri Lanka in this tough year.

England rose to world number one rankings by beating India 4-0 in August last year but face a test of their skills in the three series, the first starting here from Tuesday.

“We want to stay number one in the world. To do that, we’re going to have to win here and in Sri Lanka and then in India at the end of the year,” said Anderson ahead of the first Test against Pakistan.

“It’s going to be a tough ‘ask’ for us. But the best teams in the world do win out here (in this part of the world),” said Anderson of England’s tour to Sri Lanka in March and India in October.

England warmed up for the Test by winning both the three-day sides games, by three wickets against ICC Combined XI and downing Pakistan Cricket Board XI by 100 runs.

The 29-year-old pace spearhead, who featured in the first side game, said the players realised the enormity of the task.

“It’s going to be a tough job for us, especially for the seamers to help out our spinners. But we hope we can chip away with wickets, but our main job is to dry up runs and we know how to get 20 wickets out here.”

Anderson, who has so far taken 240 wickets in 63 Tests, hoped conditions in the United Arab Emirates will help movement for pace bowlers.

“It’s slightly different to India, because I think there’s going to be a little bit of movement early on. But generally it’ll be a flat pitch and reverse-swing and, mainly for the seamers, holding up an end for (Graeme) Swann to do his job.”

On Pakistan’s soured cricket relationship with England in the backdrop of 2010 spot-fixing scandal which ended in jail terms for Salman Butt, Mohammad Asif and Mohammad Aamer, Anderson said he was not thinking about that.

“I’ve not really thought about that, I’ve just concentrated on the leadup to this game, I’ve been approaching the way I would any other series, I’ll go there and play my natural game and be as aggressive as I usually am.”

Anderson also refuted any impression that England players would say any bitter words to their rivals.

“Words aren’t generally used anyway on the field…certainly not intelligent words anyway. That’s not something we are going to think about. We have actually forgotten, we have put that behind us, it’s in the past and that’s where it’s going to stay for us.

Phasing out of senior players should be carefully planned: MS Dhoni