We need to win next three home games: Warne

We need to win next three home games: Warne

Pushed to the wall after three defeats, Rajasthan Royals captain Shane Warne said his team has to win all three home games coming up in the next 10 days to stay afloat in the Indian Premier League. 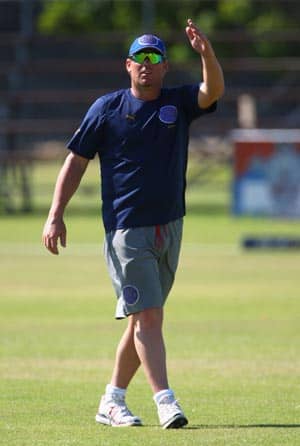 Pushed to the wall after three defeats, Rajasthan Royals captain Shane Warne said his team has to win all three home games coming up in the next 10 days to stay afloat in the Indian Premier League.

Last night, Kings XI Punjab thrashed the Royals by 48 runs at the Punjab Cricket Association stadium here. Chasing 196 for victory, Royals playing their sixth game, could manage only 147-7 in 20 overs.

“We go back to Jaipur and play three games in 10 days at home. We need to win all three,” the 41-year-old skipper said after his team’s dismal performance here. Royals take no Kochi Tuskers Kerala on April 24, Mumbai Indians on April 29 and Pune Warriors on May 1.

“(Earlier) We have won something like 9 out of 12 games at home. We are a tough team to beat at home. But Kochi, Mumbai and Pune are tough sides. I must say there are no easy games in the IPL. I think anybody can beat anybody, that’s what we have seen in IPL,” the Australian said.

Warne said every game from here on was a pressure game and the team will have to improve its batting in the first six overs.

Losing four top-order batsmen against KXIP yesterday, the Royals’ middle-order batted well and showed that if the top order had given a decent start the target could have been achieved, Warne felt.

Warne said that in a Twenty20 event, teams get smashed after losing a couple of games, but the Royals would aim put it behind them to get into winning ways again.

He also heaped praise on KXIP batsman Shaun Marsh (71), saying he is the “most wonderful striker of the ball”.

“I have said it for a long time that he is a wonderful player. I am surprised why he is not in the (Australian) ODI team,” Warne said.

The spin legend had led Royals to the title in IPL’s inaugural edition three years back. Dhoni more influential than Obama according to Time magazine