Chennai Super Kings coach Stephen Fleming feels that the team management was "smart enough to pick a side that suited Chennai conditions" which is the reason for the team's unbeaten run at home stretching to seven matches. 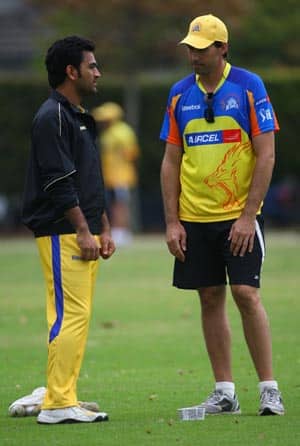 Chennai Super Kings coach Stephen Fleming feels that the team management was “smart enough to pick a side that suited Chennai conditions” which is the reason for the team’s unbeaten run at home stretching to seven matches.

“What we did was to pick a side for these conditions. We were smart enough to select a side that will play well at home. I am proud of that. There will surely be some advantage because we are conditioned to play at home,” Fleming told the reporters on Thursday.

Although they haven’t lost a single game at home, Fleming doesn’t want his boys to be complacent ahead of the final.

“It is nice to be back home. We certainly do not want to take home conditions for granted. We have had been comfortable playing at home this year but final will be a very big challenge.”

As usual, the coach didn’t want to reveal preference for any particular opponent when asked whether he would prefer Mumbai Indians or Royal Challengers Bangalore.

“I am pleased that KKR is out of the competition. They had a good attack for these conditions with Kallis, Lee and the spinners. About RCB and MI, both are tough opponents and it will be a close match.”

Talking on a different issue, Fleming agreed that players like Warne, Gilchrist, Hayden, Hussey have been big influence on youngsters.

“These players pass on their wealth of experience to the others in their franchise. We have seen what Warne and Hayden have done. We have some Indian players who talk to Michael Hussey and I enjoy listening when talk cricket.”

For Fleming, it was a huge relief that they were straight into the final after playing the first qualifier.

“It is a huge relief that we made the final because these are pressure games. Playing back-to-back games in Chennai can be very tough. Relieved that we have got across the line against a good side. It was a great game and we showed a lot of character towards the end.”

Asked whether Albie Morkel’s performance, Fleming said,”Just one knock does not justify that. He has a lot of good things. He has taken 14 wickets. He has given his best efforts number of times and if he does not get on to the final, we will be surprised.”

I will prove myself in the Windies tour: Parthiv