Stand-in T20 captain Graeme Swann on Saturday admitted that England played some "abjectly horrible" cricket during the just-concluded ODI series against India and the consolation win in Saturday's one-off Twenty20 match was not enough to heal their wounds. 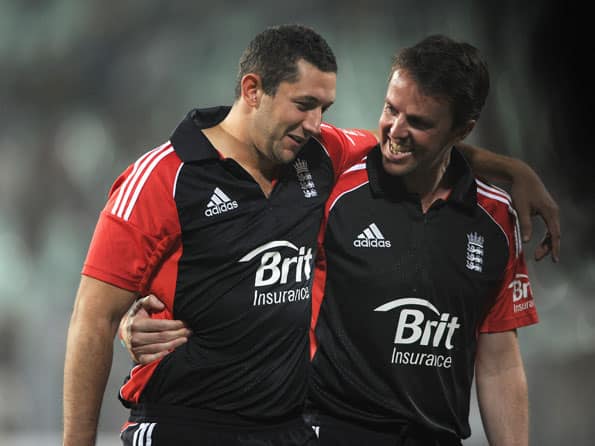 Stand-in T20 captain Graeme Swann on Saturday admitted that England played some “abjectly horrible” cricket during the just-concluded ODI series against India and the consolation win in Saturday’s one-off Twenty20 match was not enough to heal their wounds.

England were drubbed 0-5 by India in the ODI series before the visitors registered their first win of the tour with a comprehensive six-wicket win over the hosts in the shortest format of the game at the Eden Gardens.

“It’s been a very tough month for us. We’ve played some abjectly horrible cricket, but it came together today. We know that we played some poor cricket for five games, and one swallow doesn’t make a summer,” Swann said.

Indian captain Mahendra Singh Dhoni, meanwhile, said poor start to the innings after opting to bat was the main reason for his side’s defeat in the match.

“We didn’t get off to a good start. It was the sort of wicket where you’d aim for 150 odd runs. We were 15 runs short,” said Dhoni after the match.

India produced an ordinary batting performance to be restricted to 120 for nine.

Dhoni’s decision to bat first at a slowish Eden Gardens pitch backfired as barring Suresh Raina (39) and the skipper (21) himself, no other batsmen could post a challenge before the determined English attack.

At one stage, India were reduced to 26 for 3 as the hosts lost wickets at regular intervals.

Dhoni said the pitch assisted the slow bowlers and England used them effectively.

“The pitch was very slow, so it was very difficult.

Asked about the upcoming Australian tour in December-January, Dhoni said, “No point thinking about the Australian series right now, what’s important is the next few days off and then back for the Tests (against the West Indies).”

“It’ll be a good series for the youngsters, especially the bowlers,” the skipper added.

Man-of-the-match Kevin Pietersen said many English batsmen underperformed during the tour of England.

“A lot of us underperformed. But believe me, we tried our hardest. We’ve got a lot of work to do technique-wise here in the subcontinent. But we’ll continue to give our best and try to improve. We’ve tried really hard on this trip, although we came unstuck in the one-dayers,” he said. (PTI)