We still have a long way to go: Michael Clarke

We still have a long way to go: Michael Clarke

Australia might have taken an invincible 3-0 lead over India in the four-match Test series but skipper Michael Clarke doesn't want to take his foot off the pedal and said his team's goal is to be the number one side in the world. 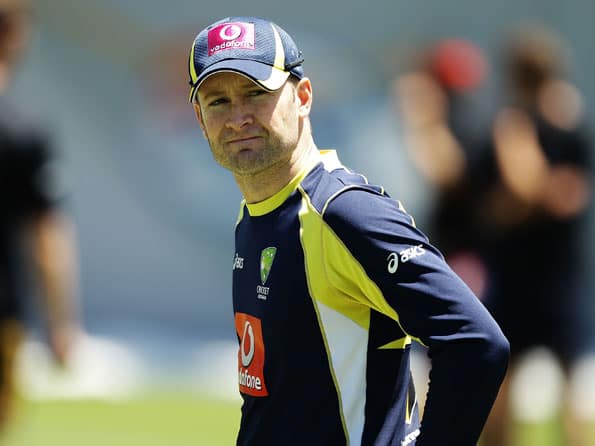 Australia might have taken an invincible 3-0 lead over India in the four-match Test series but skipper Michael Clarke doesn’t want to take his foot off the pedal and said his team’s goal is to be the number one side in the world.

“We are a long way from the team we want to be. It’s a nice feeling to have won the series but our goal is to be the number one team in the world. We are not there yet,” said Clarke after his side thumped India by an innings and 37 runs at WACA on Sunday.

“It’s going to be a tough decision for the Indian selectors if they stay with their team or change their team.

But fortunately, I’m not involved in that … My job as an Australian captain is not to pick the Indian cricket team, Thank God!,” he added.

Clarke also offered his sympathy to the Indian team for batting in such bowler-friendly conditions.

“I’m sure the Indian batting line-up are going to cop some criticism for not performing as well as they would have liked, but they have been bowler friendly conditions.

“I think we’ve seen Melbourne and here, both conditions suited fast bowlers … Pitches in Australia, over the last couple of years, have certainly had more grass on them and been more bowler friendly which is new for all of us to be honest,” he added.

Clarke said going with a four-prong pace attack helped his team and credited his batsmen for performing so well under difficult conditions.

“That’s why a lot of credit needs to go to our batters.

Not only Davie (Warner) who batted unbelievably well out there, but also his partner Ed (Cowan). As an opening partnership, they played really well in pretty tough batting conditions.

“They made it look easy but there was enough out there for the bowlers as we’ve seen today. I made it clear to him (Warner) when I walked out. I said to him ‘are you batting on a different wicket.’ I’m coming off 329, so if you’re coming off not many runs, it was hard to bat out there,” he added.

The WACA Test ended inside two and a half days but Clarke said it doesn’t mean it would result in waning interest among public in the longer format of the game.

“It’s been very exciting the whole series. I think public has loved seeing the game move forward. The WA fans would have liked a full day’s play today and a full day’s play tomorrow, so they could come out to watch. We’ve got a sold out crowd the last two days and the crowd was pretty good today.”

Clarke said as skipper of the Australian side, he isn’t inclined to take everything for granted.

“It’s very easy when you get a couple of wins to take things for granted and we haven’t done that, both individually and as a team,” he said.

“We made a pact yesterday that our goal was to not have to send our batters back on that wicket in the second innings.

It was pleasing we were able to stick to our word today.”

Clarke made a sharp reaction when he was reminded of the “dead rubber” syndrome for the final Test at Adelaide — a fact that Australia tends to lose matches which don’t matter.

“Take those words back please. You’re asking the wrong guy. There is no such thing as a dead rubber for me. We haven’t achieved much at this stage. We have a lot of work to do before we’ll be satisfied. You’ll see that in Adelaide.”

“Our goal hasn’t changed from the first Test of the series. It won’t change until we achieved what we want as a team,” Clarke said.

The 30-year-old skipper also gave thumbs up to two of his struggling players, Shaun Marsh and Brad Haddin, for the final Test at Adelaide, beginning on January 24.

“I think they’re a big part of our team. Shaun scored a Test hundred against Sri Lanka. He’s got a hell of a lot of talent, he’s a big player for us. I know he’d like a few more runs but I’m confident he can get those in Adelaide,” he said.

He’s probably not making as many runs as he’d like but he’s vice-captain and a very experienced player for us.”

Asked what would be the position of Nathan Lyon and Shane Watson — if he is fit for Adelaide — in the four Test, Clarke said the spinner will certainly be in the team but he wasn’t sure of the allrounder.

“I think Nathan Lyon will certainly come back into the team given conditions in Adelaide are generally flatter and spin a lot more than what we’ve seen here in Perth.

“I haven’t even thought about where Watson will bat in the order when he’s back. Until he is fit, we don’t have to worry about it,” he said.

Clarke has so far kept himself away from the IPL but said he wants to play the twenty20 tournament at the right time in future.

“For me personally I haven’t felt the timing has been right to go and play IPL. I’ve had other things going on in my life, and my body’s needed a break. But at the right time, it’s a tournament I’d like to take part in.

“It’s up to the individual. You look at the guy sitting beside me (David Warner). He has played IPL and he’s still creaming them for Australia in Test match cricket. I think it’s about where you are at with your body.

“The greatest thing about the IPL is it’s the individual’s choice to go and play. You’re not made to play,” he added.(PTI)

BCCI concerned by India's poor show Down Under