We stuck to our plans and got results: Fidel Edwards

We stuck to our plans and got results: Fidel Edwards

West Indies fast bower Fidel Edwards has hailed his 11th five-wicket haul in Tests but says his focus is on ensuring the Caribbean side emerge victorious in the second Test against Bangladesh. 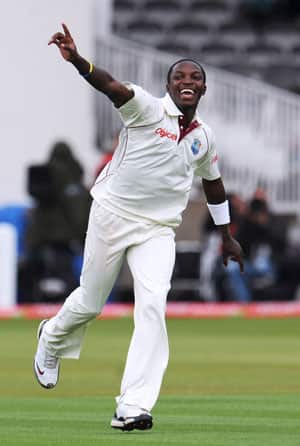 West Indies fast bower Fidel Edwards has hailed his 11th five-wicket haul in Tests but says his focus is on ensuring the Caribbean side emerge victorious in the second Test against Bangladesh.

The 29-year-old Barbadian bowled with hostility to liven up a previously benign pitch at the Sher-e-Bangla National Cricket Stadium, finishing with five for 58 to bowl out Bangladesh for 231 in reply to the West Indies’ 355 all out.

“It always feels good to get five wickets in a Test match innings. With the total we put up on the board, it gave me the encouragement to run in and be really aggressive,” said Edwards in his 48th Test.

“We knew the Bangladesh batsmen would come out and play their shots and it worked well for me. It was a pretty good day for me and the team, but the job is far from done.”

“We have to look to get those last three wickets and bowl them out and take full control of the match.”

Edwards’s burst came after the West Indies pushed on from their 253 for five overnight, to build a competitive total.

The innings built around 121 from Kirk Edwards and 48 from Marlon Samuels.

Edwards then removed the first five Bangladeshi batsmen as the hosts crashed to 59 for five before Shakib Al Hasan (73) and Naeem Islam (45) shared 84 for the sixth wicket.

“The plan was to be aggressive – to bowl with pace and try to come hard at the Bangladesh batsmen. If you have the pace, you can make it uncomfortable for the batsmen,” Edwards pointed out.

“The pitch here is good for batting but it also has something for the faster bowlers as well. We saw that when we batted, so we knew once we got things right, we could strike some early wickets with the new ball,” he said.

“You have to bowl to your plan. We stuck to our plans and got the results. The plan was to be aggressive and take wickets and contain them. The containing part didn’t work out, but the wicket-taking part did.”

Edwards, who finished with only two wickets in the rain-ravaged first Test in Chittagong last week, said he realised adjustments needed to be made.

“This is just my second match in Bangladesh and before coming here I did not know the pitches that well. Having played the first Test, I realised I had to adjust my areas and it worked well in this match,” he explained.

“In the first match, I didn’t get it quite right but here today (Sunday) I made the adjustment and came away with five wickets. I’m not thinking about figures or numbers, I’m just thinking about bowling them out twice and winning the Test match and the series.” (IANS)