England are world's best Test side now but the way their bowlers have throttled the Indian batting has been the overriding factor of the ongoing series. 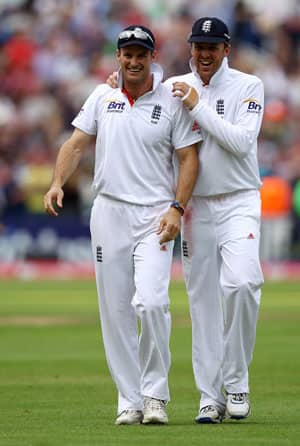 England are world’s best Test side now but the way their bowlers have throttled the Indian batting has been the overriding factor of the ongoing series.

England captain Andrew Strauss revealed his bowlers methods which is primarily to frustrate the opposition batting.

“Our method over the last couple of years has been to frustrate the opposition player. It doesn’t matter what your record says, in any innings you have to overcome the type of bowling and conditions. I think we’ve exerted a lot of pressure on all their batsmen,” Strauss said at the post match media interaction.

India hasn’t suffered a batting slump of this scale for a long time. But for Rahul Dravid, every top batsman has failed to contribute substantially.

Man-of-the-match Alastair Cook backed the claim of his captain on his bowlers.

“It’s a lot of credit to the way our bowlers have bowled?All four bowlers, five if you include Chris Tremlett, offer something different and continue to prey on people’s weaknesses. It’s a pleasure to be the ball-shiner for them because you know it gets reward. Our job as a batting unit is to try and give them some time off, so they are as fresh as they can be.”

Both Strauss and Cook maintained that it doesn’t serve to rest on one’s laurels and being world’s No. 1 Test side doesn’t take their mind off the final Test at Oval, starting Thursday.

“There’s a huge task ahead of us not only to stay No 1 but also to compete in every series we play in and win as many of them as possible,” said Strauss.

“Being No 1 can go away as quickly as it arrives. You just can’t sit there patting yourself on the back too much?clearly we haven’t reached the end of the road here. There are going to be stern Tests in future..away from home in particular but I think we’re up for the challenge.”

Cook too claimed the side was more intent on looking at parts rather than the whole sum of their effort.

“We still are at the start of a journey, rather than the end of it. We will enjoy tonight but then come back in the next couple of days desperate to start again. We just try to control the next game and that’s what has worked so well for us.”

The left-handed England opener said it was a privilege to play in this team and firmly believed they are on way to doing something special.

Same words were echoed by Strauss whom many were inclined to believe is the best captain of the world now.

“I think my job’s been very easy and that’s because of the individuals involved.”

One of the individual involved of course has been seam bowler James Anderson who has exerted control on the incomparable Sachin Tendulkar in the series and taken 18 wickets at 24.27 average.

“We’ve all seen his onfield exploits with the swinging ball, and even when it hasn’t swung, he’s become a very effective campaigner.

“He’s not an out-and-out quick bowler now but he’s very smart in what he does. Off the pitch, the way he interacts with other bowlers, the example he sets (helps). We all hope his best years are still ahead of him.” (PTI)