We want to win all four Tests against India: Michael Clarke

We want to win all four Tests against India: Michael Clarke

As Australia look to seal the four-match Test series against India at the WACA cricket ground, skipper Michael Clarke feels that going ahead with an all-pace attack in the Friday's match is "no guarantee of success". 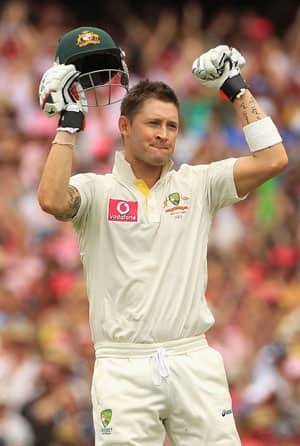 As Australia look to seal the four-match Test series against India at the WACA cricket ground, skipper Michael Clarke feels that going ahead with an all-pace attack in the Friday’s match is “no guarantee of success”.

“We also played four quicks against India in Perth four years ago and lost, so it is no guarantee of success, even in helpful conditions,” Clarke wrote in his column for the News Limited newspapers.

The skipper, however, said they want to inflict a 4-0 whitewash upon the visitors and added more than the selection of the players it will be their attitude that will decide the result of the series.

“It’s great to be 2-0 up after strong victories in Melbourne and Sydney but that is all history now. We want to win all four Tests against India and are only halfway there,” he wrote.

“It is our attitude as much as our personnel which will make the difference over the next week,” was skipper’s observation.

There are speculations that Australia would field four fast bowlers in Perth, which is expected to support a pace-friendly pitch.

Clarke, however, is in a dizzy over the decision but informed there “need to be exceptional circumstances” for him not to play off-spinner Nathan Lyon.

“I don’t know (whether we will play four fast bowlers in Perth). Until we look at the pitch, it’s impossible to get an accurate gauge of how it might play,” Clarke stated.

“It’s always a tough decision to leave out a spinner. Five days is a lot of cricket and pitches can change enormously in that time,” the skipper said.

He, though, conceded that if the pitch is fast, bouncy and with plenty of grass generating sideways movement it would be “seriously tempting” to play Mitchell Starc in place of the offie.

Clarke cited the example of the Sydney Test where there were contrasting first two days.

“We only have to look at the recent Sydney Test, when 13 wickets fell on the first day and just one on the second. You don’t want to take in four fast bowlers and find out late in the Test your attack is crying out for variation, particularly if you’re bowling last,” he said.

Clarke pointed out that the Perth wicket has been helpful to the off-spinners in the past and it was not necessary for a bowler to have a turner to get his art working.

“Pitches don’t need to turn for spinners to make an impact. Off-spinners have been successful in Perth before drifting the ball away from the right hander into the breeze,” the captain insisted.

Clarke said the tweaker can exploit the cooling afternoon sea breeze to his advantage to fox the batsman.

“The Fremantle Doctor can blow quite strongly coming up from the south-west and you need bowlers who can use it rather than fight it. Clarke said “it will be great have Ryan (Harris) back” in the Australian fold although he rued the absence of rookie pacer James Pattinson, who has been ruled out of the remainder of the series with a foot injury.

“Sadly, Ryan’s return is at the expense of James Pattinson, who has been outstanding. It is a real shame that James has been ruled out with a foot injury. If he continues to develop the way he has this summer, James has the potential to be one of the best fast bowlers in the world,” he said.

He, however, deposed faith in the abilities of Starc, who is pitted to play in the third Test.

“Mitch is a real talent who showed glimpses of how damaging he can be with his man-of-the-match award for the Sydney Sixers in the Big Bash earlier this week.

“He may well provide the left-arm inswing that Mitch Johnson devastated England with last summer,” he added. (PTI)

India squad for Twenty20, tri-series in Australia to be announced on Jan 15