Malinga's magic floored New Zealand, who in pursuit of 126, were skittled for just 88 with the veteran bowler finishing with 6/5.

New Zealand skipper Tim Southee couldn’t help himself from being in awe of his Sri Lankan counterpart Lasith Malinga after the fast bowler expanded his legacy in T20 cricket by not only claiming a hat-trick but picking up four wicket in four balls for the second time in his career. Malinga’s magic floored New Zealand, who in pursuit of 126, were skittled for just 88 with the veteran bowler finishing with 6/5 from four overs.

“It’s an amazing spell of bowling,” Southee said after the match. “He’s been a world-class bowler for a long time and he’s shown his class tonight. When his team needed him to stand up, he did. He bowled exceptionally well and to pick up four [wickets] in an over really breaks the back of a run chase.”

The first time Malinga took four wickets in four balls was during the 2007 World Cup against South Africa. 12 years later, Malinga, in the final leg of his career, took out Colin Munro, Hamish Rutherford, Colin de Grandhomme and Tim Seifert off successive deliveries to become the first bowler doing so in T20Is. The wicket of Munro was also Malinga’s 100 in T20Is, a place where no other has reached.

“It was a disappointing way to end what’s been a pretty good tour,” Southee said. “We realised pretty early on, with the ball, that it wasn’t going to be a big-scoring wicket, compared to the two surfaces we played on in the first two games. It was probably one big partnership away from breaking the back of that chase, but we were outdone by a piece of brilliance from Malinga.

“It was nice to get a partnership towards the end and it would’ve been nice to hang around for a little longer. It has been a great crowd here for the T20s, and it has been a learning tour for the youngsters.” 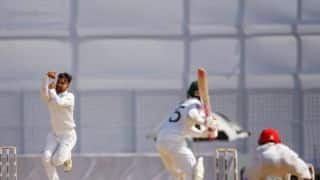