India batsman Virat Kohli insists the world champions will prove Nasser Hussain wrong after the former England captain labelled some of the tourists as "donkeys". 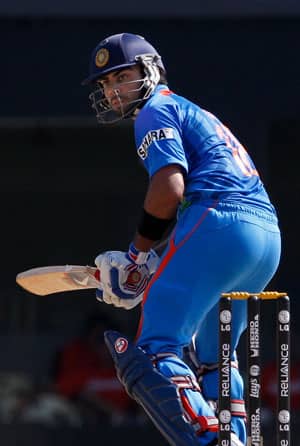 India batsman Virat Kohli insists the world champions will prove Nasser Hussain wrong after the former England captain labelled some of the tourists as “donkeys”.

Hussain made the controversial remark about India’s fielding while commentating during Wednesday’s one-off Twenty20 international, which England won by six wickets.

The comment has prompted criticism in India with the Board of Control for Cricket vice president Rajiv Shukla describing it as “totally uncalled for”.

India have endured a miserable tour to England, losing their position as the number one Test team after being drubbed 4-0 by Andrew Strauss’s team, but Kohli believes Hussian’s criticism was wide of the mark.

He points to India’s successful World Cup campaign earlier this year as proof that the tourists have nothing to be embarrassed about when it comes to fielding in hectic one-day games.

“Everyone has their opinion. We don’t have to get angry about it and try really desperately to change it,” said Kohli ahead of Saturday’s opening one-day clash against England in Durham.

“I don’t really pay attention to all of this. We just have to do what we have been doing for a while. We haven’t become world champions just like that.

“If we fielded like the remarks that have been said then we wouldn’t have been world champions.

“I don’t think these remarks should be making a difference to us. It’s up to us to perform at our level best – like we have been for a while in the limited-overs format.

“We are the ones playing in the field and we have to know that we’ve given 100 percent.”

India head into the series without a win over England on tour so far but Kohli is among a number of new faces to join the squad following the Test series, and he believes they can turn around a forgettable trip so far.

“It’s all about how you come back and fight,” he said. “There is no embarrassment (in the Test series defeat) because that is part of cricket.

“We were beaten fair and square. We have no complaints about that.

“We have some new faces in the team now and they are fresh and up for the challenge.

“We are working hard in practice. We hope to win this series and turn things around.”

Many of the changes India have made have been forced upon them by injury, with Ravindra Jadeja due to join the squad after Gautam Gambhir became the latest player to fly home.

However, young opener Ajinkya Rahane took his chance with a blazing 61 from 39 balls in the Twenty20 and is set to make his 50-over debut on Saturday.

“Injuries are unfortunate but they present opportunities for the players coming in,” Kohli added.

“We saw Ajinkya due extremely well on Wednesday. All those who have been called in are up for the challenge.”(AFP)