Finch admitted that he was the "weak link" in Australia s 1-2 defeat to India in the three ODIs in which the Aussie skipper scored 26 runs from three matches.

Australia s limited overs captain Aaron Finch feels the little break in cricket should help him get some momentum back, referring to his torrid form during the home summer against India. Finch admitted that he was the “weak link” in Australia s 1-2 defeat to India in the three ODIs in which the Aussie skipper scored 26 runs from three matches.

After being dropped from the fourth Test against India in Sydney, Finch was ignored for the two-Test series against Sri Lanka starting January 24. He will now spend the next month playing the Big Bash League with Melbourne Renegades before embarking on a tour of India followed by one against Pakistan in the UAE.

“It’ll be good to be at home and to spend some time around some friends again,” Finch said. “It was obviously a disappointing series. Nowhere near as many runs as I would have liked or as big an impact with the bat. We’ve seen some real improvement in the way we’ve batted in the last three ODIs in particular. I was probably the weak link in that which is disappointing for me as the captain of the side.”

Finch is expected to be spending time with his wife and family during a holiday in April before he gears up for the World Cup. However, immediately post that, the skipper seems certain on fine tuning a few technical flaws which India s bowler figured. Finch was found wanting against the moving ball first up, being dismissed by Bhuvneshwar Kumar all three times in the ODIs.

“I think this time will be really good to be able to work on my game with some more time in the schedule,” Finch said.

“I think it will allow me to work on specific things in my game. When you’re trying to tinker with a few things with a day in between games and things like that, you don’t have enough time to hit enough balls to be able to get that set. I’m really excited about the next couple of weeks to work on my game and hopefully get that right. I’ve got a lot of confidence in myself that I can do that but time will tell.” 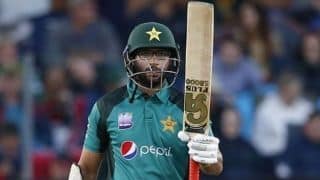