Indian skipper Mahendra Singh Dhoni blamed the rain for the defeat in the first Twenty20 international against Australia, saying the wet conditions made it difficult for bowlers. 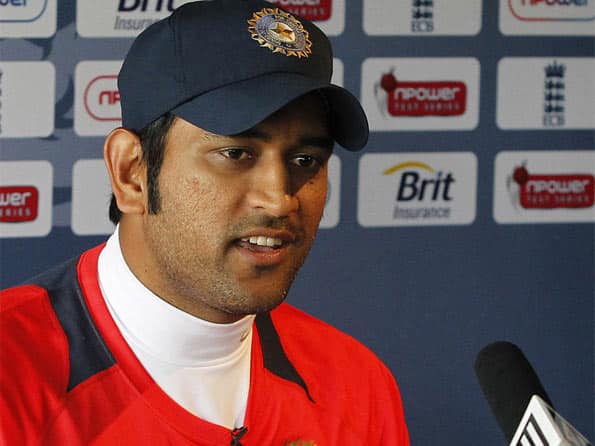 Indian skipper Mahendra Singh Dhoni blamed the rain for the defeat in the first Twenty20 international against Australia, saying the wet conditions made it difficult for bowlers.

India lost the first T20 by 31-run and will have to win the next match on Friday to level the series.

“The weather played a big part in it. In England, we didn’t win any tosses and it rained in the second innings and our bowling suffered because of that. This is the first toss I won over here and with the rain forecast I thought we would chase. But then it rained and spinners had difficulty in gripping the ball,” said Dhoni in what is turning out to be a miserable summer for him.

“With the rain forecast and with the learning from England, I thought we would chase because the wicket gets better to bat on,” he pointed out.

No sooner had Dhoni won the toss, it began to rain and even though it stopped soon enough, the ground was quite wet which affected the spinners from gripping the ball.

“I thought the wicket, if it doesn’t get better it would at least remain the same. We got off to a good start but after that it didn’t rain. It started to turn and grip and the odd ball was bouncing more than the normal delivery. It was difficult.”

Dhoni though didn’t stop short of criticising his batters who failed to show any application.

Dhoni defended his decision to field two specialist spinners besides letting his part-timers to turn their arms over.

“At that point of time you think of how do you get through the adversities. The pick was, we wanted to pick Rahul (Sharma) because he did really well for us in the IPL.

“If you see his bowling analysis, he did the job he was supposed to do. As far as decision of playing 3-2 was concerned, I think all the spinners did well.

“Jadeja was a bit expensive but the normal scenario we always play him because he gives us the balance when needed.

The part-timers also contributed. Raina bowled two very good overs. Overall, it went our way because in between, we were able to pull the game back towards us.”

Debutant Australian captain George Bailey said his team showed they were better in all departments.

“The early wickets helped. But all across the board we were good. We too would have batted first it slows up a little bit later. It’s not that Indians lack skills. They are an outstanding batting line-up. We took some early wickets, the run-rate was climbing up and you have to keep going.

“The beauty is they would come fresh and you still have to get virender Sehwag out again. The team effort was good, we executed our plans well. The general feeling was there was a great energy about the team.”

Man of the match Matthew Wade believed that confidence has made him a better player.

“My batting has come along. Especially in one-day cricket. It took me sometime to get used to Twenty20 but it has come along. I think there’s a lot more confidence in my game. I can compete at the highest level.

“The spinners were difficult to play generally throughout the innings.”

Bailey too conceded that spinners were difficult to play around.

“I was batting with Hussey who is one of the cleanest strikers and even he was struggling. Apart from Warner and Shaun, the rest have been playing T20 and generally thinking about the game and preparing. It really helps.”(PTI)

Sri Lankan players to feature in tri-series without pay