Stoinis failed with the bat but returned figures of 3 for 35 to allow Australia to successfully defend a total of 231.

Allrounder Marcus Stoinis admitted to being exhausted after Australia beat South Africa by seven runs to snap their seven-match losing streak. Stoinis failed with the bat but returned figures of 3 for 35 to allow Australia to successfully defend a total of 231. On a surface that wasn t the easiest to bat on, only one batsmen went past 50, and in the aftermath of Australia s hard-fought win, Stoinis spoke about how much the team was drained following their string of losses.

“I m bloody tired,” Stoinis said. “We re all bloody tired. All the bowlers are cooked. It was a big effort, so really proud of everyone. At the end of the day, all the guys that are in that team fight so hard, want to be there so much, train so hard, think about cricket all day every day.

Defending 231, Mitchell Starc and Josh Hazlewood started off well bowling a tidy line. It yielded the wicket of Quinton de Kock taken by Starc for nine. Aiden Markram was run-out for 19 in the tenth over. Wickets of Reeza Hendricks by Hazlewood and Heinrich Klassen by Stoinis left South Africa reeling at 68/4. Stoinis accounted for Miller in the 44th over and then send back Dale Steyn for three to effectively end South Africa s hopes.

“(It was) probably a good way to start the innings for us because we felt like we had enough on the board but we weren t really happy with how we batted,” Stoinis said. “So it was good that we got an early wicket, got a run-out, go the momentum in our favour. That s what we ve been working at.

“We work every day trying to hone our skills, and I personally think because there s so much noise going on (the) cricket game moves so fast, and you can t possibly concentrate as well as you d like to with all the noise. So that s part of the art of playing international cricket is we ve got to start really internalising all that sort of stuff and focusing on what s really important for us.” 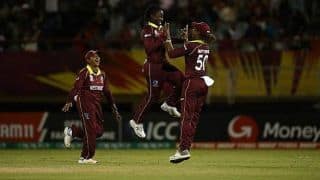 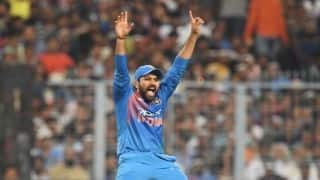