West Indies will have to come out stronger in the post-tea session.

West Indies finish at 102 for four at Tea on Day 1 of the 2nd Test at Grenada. West Indies were 36 for 2 at Lunch in a match that began late due to rain. But England managed to pick up three more wickets in the post lunch session to put England in control of the match at the moment. Marlon Samuels and centurion from the first match Jermaine Blackwood are the unbeaten batsmen going into the tea break. Live Updates: West Indies vs England, 2nd Test, Day 1

West Indies lost Darren Bravo for 35 and was soon followed by ShivNarine Chanderpaul back into the hut. James Anderson, Stuart Broad, Stuart broad and Chris Jordan have one wicket apiece and will look to cause more damage in the final session of the day. LIVE SCORECARD: West Indies vs England

Kraigg Brathwaite opened the batting with Devon Smith. James Anderson and Stuart Broad were in the middle with the new ball and there was swing early on. After a couple of overs, Anderson got through the defence of Brathwaite and England had their first success of the day. West Indies vs England 2015, Free Live Cricket Streaming Online on Ten Sports: 2nd Test at Grenada Day 1

The run-scoring rate was very slow as Darren Bravo and Devon Smith holding fort. They were negotiating the swing and managed a few boundaries to get the run-scoring up and running. Nevertheless, the bowlers were on top and managed to keep the pressure on right through the session. And a few minutes before lunch, Smith was dismissed as he edged to wicketkeeper Jos Buttler off Chris Jordan. 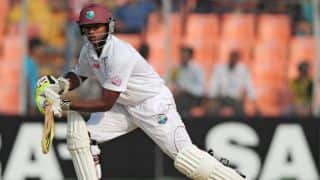