West Indies are at six for one after bowling New Zealand out for 221 at Trinidad and Tobago.

It was a brilliant bowling display from West Indies as New Zealand collapsed from 120 for one to 221 all out. Jerome Taylor was the pick of the bowlers as he took four wickets. He was backed up by Sulieman Benn, who took three wickets. Tom Latham top-scored for the Kiwis with 82 off 163 deliveries. Ross Taylor remained stranded on 45 off 80 deliveries.

The session began with New Zealand at 159 for three. Left-arm spinner Benn got the wicket of Brendon McCullum on the second ball after tea. He slid one in from round the wicket and McCullum missed with a forward defensive push. The players appealed but the umpire did not raise his finger. Benn wanted the review and replays showed that the ball would have hit high on middle-stump.

The decision was reversed and McCullum had to go back to the dressing room. Jimmy Neesham was the next batsman in. He hit a four off Roach through mid-wicket. Taylor then got back-to-back fours off Roach in the 58th over. Jerome Taylor angled one into Ross Taylor and the batsman flicked the ball behind square on the leg side to get his sixth four.

Jerome bowled a short and wide delivery and Neesham flashed at it. He only edged the ball to Gayle at first slip. Jerome then got the wicket of next batsman BJ Watling quickly. He bowled a full delivery outside off-stump and Watling edged it to Denesh Ramdin behind the wickets. That gave Jerome his 250th wicket in First-Class cricket.

The right-arm fast bowler continued his excellent spell of bowling as he dismissed Ish Sodhi for a 10-ball duck. He bowled an out-swinging good length delivery and Sodhi edged the ball to Gayle at first slip. In the 71st over, Benn struck as he dismissed Tim Southee LBW for 10. The ball pitched on off-stump and straightened. Southee missed and the ball hit him on the pads. The players appealed and the umpire raised his finger. Southee reviewed the decision, but to no avail.

Mark Craig was the next batsman in. He got of the mark with a slash off Shannon Gabriel over gully for a four. But Gabriel struck back with a wicket on the next delivery. He bowled a short delivery angling away from Craig and the batsman could only edge the ball to Darren Bravo at second slip.

Benn drifted one in and Boult missed as the ball hits his pads. The players appealed and the umpire said ‘out’. Boult reviewed the decision, but the third umpire saw no reason to change the on-field umpire’s decision. New Zealand were bowled out for 221 in their first innings. It was a total batting collapse for New Zealand as they were at 120 for one at one stage.

Gayle and Kraigg Brathwaite opened the innings for West Indies. Boult began proceedings for New Zealand. Gayle was bowled by a brilliant delivery from Boult. The left-arm swing bowler bowled a full and out-swinging delivery. Gayle did not move his feet and missed the ball as it hit off-stump. Benn came out to bat as night-watchman. Benn and Brathwaite managed to remain not out till stumps on Day One. West Indies trailed New Zealand by 215 runs. 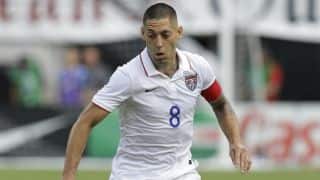 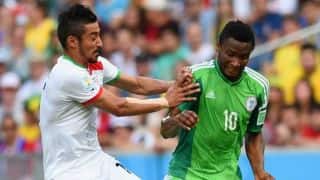