The first Test begins on October 21, while the second Test will be played from November 2 with both matches to be held at the Queen's Sports Club in Bulawayo.

Barbados: West Indies have named the an unchanged squad for the upcoming two-Test series against Zimbabwe, retaining the same 16-member squad who featured in the 1-2 loss against England in the three-match series.”The selection panel is pleased to announce the same Test squad that toured England to visit Zimbabwe,” ESPNcricinfo quoted Courtney Browne, the chairman of selectors. “The dedication, commitment and focus in their preparation and during the series in England showed immense character for such a young team in very difficult conditions against World-class competition,” he added.

The chairman of selectors further said the lessons learnt on the England Tour augur well for the individual players and the team’s continued development as a whole. West Indies will begin their tour with a three-day warm-up game against Zimbabwe A, which begins on October 15 at the Bulawayo Athletic Club.

The first Test begins on October 21, while the second Test will be played from November 2 with both matches to be held at the Queen’s Sports Club in Bulawayo. 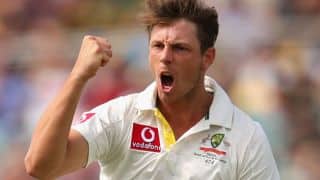 The Ashes 2017-18: James Pattinson ruled out with stress fracture