West Indies lost the three T20Is versus Pakistan by big margins 143 runs, 83 runs and 8 wickets with more than three overs to spare.

Veteran commentator Fazeer Mohammed has said that West Indies‘ tour of Pakistan, where they were thrashed 3-0 in the T20I series, was nothing but a humiliating experience for the Caribbean side. Windies came into the series in absence of their senior players. Veteran players like Chris Gayle, Jason Holder and Evin Lewis along with the T20 captain Carlos Brathwaite pulled out of the tournament.

Marlon Samuels, Denesh Ramdin and Samuel Badree were the most experienced players who featured in the series. “With the very greatest respect and regard for the good people of Pakistan delighting over the return of official international cricket to Karachi and the manner in which they annihilated the West Indies, those three T20 Internationals were, from a Caribbean perspective, nothing but a humiliating experience,” Pak Passion quoted Fazeer as saying.

The margin of the defeats – 143 runs, 83 runs and by eight wickets with more than three overs to spare – were depressingly one-sided, he said.

West Indies lost the last match on April 3, which was the same day when they triumphed over England in the World T20 in 2016 at Eden Gardens. The match was won with Carlos Brathwaite’s unforgettable four consecutive sixes off Ben Stokes in the last over of the final.

Fazeer held the Cricket West Indies for the poor performance of the team. “The surreptitious manner in which a team was put to together by a Cricket West Indies administration that has shown absolutely no regard whatsoever for whatever vestiges of pride and prestige are left in the team for which they are ultimately responsible,” Fazeer noted.

He added that as big players retrained from touring Pakistan due to security concerns, the West Indies board added all those players in the squad who agreed to go due to the financial incentive.

“This West Indies team skippered by Jason Mohammed is what we refer to in these parts as a “pick-up” side, meaning that you just take on board whoever happens to be standing in the way and available for the trip,” Fazeer said.

“Add to that the fact that CWI said nothing about the three matches while the Pakistan Cricket Board were providing all the information leading up to the brief series and the abiding impression to Caribbean followers of the game was that this was almost a secretive operation.”

Recalling the recent World Cup Qualifiers, he added that it was hugely embarrassing for the two-time World Cup winners to have to go through the qualification event in Zimbabwe.

“They made it, yes, but their performances were hardly convincing. In every single match, there were periods of real struggle and of course in the critical fixture against Scotland, Jason Holder’s men benefited from a poor umpiring decision and then torrential rain to sneak a five-run win that confirmed World Cup qualification,” he said. 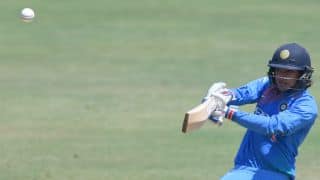