Jerome Taylor effectively ended the chase when he took three wickets for one run in his first two overs.

Pakistan pressed the self-destruct button as only they can, crashing to one for four, and being bowled out for 160 in response to West Indies’ huge 310 for six in the 10th match of the ICC Cricket World Cup 2015 Pool B match at Christchurch. West Indies won by 150 runs, thereby making Pakistan suffer their largest defeat in terms of runs in World Cup history. Jerome Taylor ripped out any possible fight from Pakistan by taking two wickets in the first over of the innings, and there was no looking back after that. With this win, West Indies open their account and move up to the No. 2 position on the points table. Full Scorecard: Pakistan vs West Indies, Pool B match at Christchurch

Taylor got rid of Nasir Jamshed with his second delivery, getting the left-hander to top-edge a pull shot to Andre Russell. Off his sixth ball, he bowled a peach of an out-swinger that took Younis Khan’s outside edge through to Denesh Ramdin. Haris Sohail was the next to follow, driving on the up to the man at point. Jason Holder then came to the party, inducing an outside edge from Ahmed Shehzad, who tried to play an expansive drive. Live Updates: Pakistan vs West Indies, Group B match 10 at Christchurch

At one for four — statistically the worst start to an ODI innings in the history of the game — it seemed only a matter of time before Pakistan were cleaned out. They were soon 25 for five, with Misbah-ul-Haq back in the hut for seven, edging to Chris Gayle at slip off Andre Russell. Thereafter Umar Akmal and Sohaib Maqsood buckled down and added 80 crucial runs before Maqsood holed out to Suleiman Benn off Darren Sammy for 50. ICC Cricket World Cup 2015: POINTS TABLE

That brought in perhaps Pakistan’s most popular cricketer, Shahid Afridi. Before the Akmal-Afridi partnership could come to fruition though, Akmal pulled crisply to the man at deep square leg and was out for 59. Afridi continued on his way but fell just two short of 8,000 ODI runs in the process. In the end, Pakistan were well and truly overwhelmed. ICC Cricket World Cup 2015: SCHEDULE & MATCH DETAILS

West Indies overcame themselves and were aided by Pakistan’s shoddy fielding en route to a competitive 310 for six. It was a typical West Indies innings; the openers failed, Marlon Samuels played like a millionaire and perished a pauper, Darren Bravo’s innings ended just as he was looking sublime, Denesh Ramdin scored a brisk 50, Lendl Simmons played a neat cameo, and Darren Sammy and Andre Russell slogged with abandon. ICC Cricket World Cup 2015: Complete Coverage

The match was built up as a battle of the unpredictables, and Pakistan and West Indies did their utmost to live up to that billing. If West Indies did their best to offer Pakistan chances, their opponents graciously let those go by. Dwayne Smith was the first man to prosper, getting dropped by Nasir Jamshed at third man. However, Chris Gayle ensured that the drop would not prove costly by going for the a similar slog in the same over and getting caught by Wahab Riaz for four.

Smith followed soon enough, edging Sohail Khan to slip for a stop-start 23. The brought Bravo and Samuels together, and the duo ensured that there were no more (major) slip-ups for a while. They added 75 for the third wicket before Samuels’ dismissal. Samuels seemed intent on going all guns blazing, and eventually perished for a stroke-filled yet slow 38.

Denesh Ramdin came in next, and started in fine fashion. Just as his stand with Bravo started looking threatening, Bravo’s hamstring gave way and he had to be carried off the field in a buggy, retired hurt for 49. Ramdin scored a quick 51, but was out in the same over he got to the landmark, holing out to Yasir Shah off Haris Sohail.

Lendl Simmons did his best to boost the run rate toward the end, and managed to get in the odd boundary as well. Pakistan remained sloppy throughout, dropping catches as late as the 46th over. Their bowlers did a good job restricting the West Indian batsmen, but could have proven far more effective had the fielding been up to an international level.

Darren Sammy and Simmons then took over from where they left off in the last match, putting on a quick 50-run stand as West Indies went past the 250-run barrier. Sammy brought out the big hits before falling for a 28-ball 30. Andre Russell came out and hit sixes almost at will, ending up unbeaten on 42 off just 13 balls as West Indies raced away to a big total. 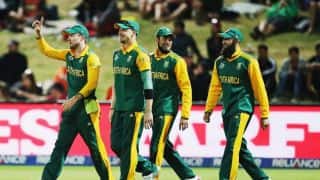 India vs South Africa, ICC Cricket World Cup 2015: Are Proteas over-doing it by roping in more cricket experts than needed?