Australian all-rounder Shane Watson believes that the West Indies will be the team to beat in the ICC Twenty20 World Cup which kicks off in Sri Lanka in September. 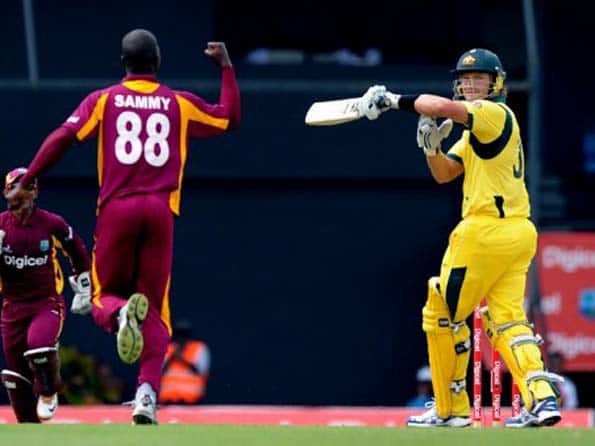 Australian all-rounder Shane Watson believes that the West Indies will be the team to beat in the ICC Twenty20 World Cup which kicks off in Sri Lanka in September.

“I actually think the West Indies are going to be the team to beat. They have got a really well balanced team that has played a lot of high quality Twenty20 cricket around the world and they certainly know how to perform under pressure. I think they have got the firepower to give a lot of teams a big surprise,” said Watson.

However, Watson thinks the experience gained by Australia’s players in domestic T20 competitions across the globe, means his side may be able to go one better than its runners-up spot at the 2010 event in the Caribbean.

“It is a format in which we still haven’t been able to play well consistently against other countries in the world. We made the final in the last ICC World Twenty20 in the West Indies and in the end we were pipped by England but since then we haven’t played consistently well, so we are really going to have to step up our Twenty20 game.

With a change in players and the experience of playing in different Twenty20 leagues, it means hopefully we can step up when we really need to,” he said.

Meanwhile, Watson admits he is excited about the upcoming ODI series against England that begins Friday.

“It is going to be a huge series. It is a great lead-in to next year’s Ashes and there is no doubt we have to be at our absolute best for that one-day series so our preparation is going to be very important, as is the way we perform. It is the first time for us with a slightly newer group of cricketers, a new coach Mickey Arthur and a new structure around us,” said Watson.

Watson, who missed much of the Australian summer through injury, is hopeful that he is now over the string of injury problems that have hampered his career.

“I’ve learnt a lot about the way I am going to get the best out of myself as an all-rounder, about my bowling workload and what my body can do. I am trying to find the best ways to give myself the best chance of not getting injured.”

“In the three months during the summer when I was injured, I learnt a lot and I have put a few things in place again to make sure that I am doing everything I can to give myself the best chance I can of staying fit,” he said. (IANS)

UP government plans to build international stadium in Lucknow