West Indies head coach Ottis Gibson has praised the form of Marlon Samuels following the right-hander's outstanding batting in the second Test which finished inside four days at Trent Bridge on Monday. 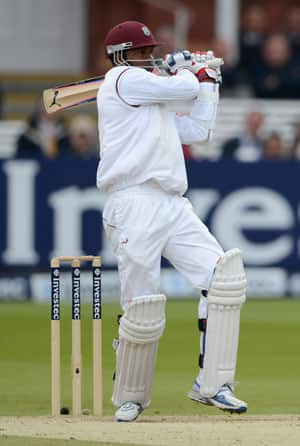 West Indies head coach Ottis Gibson has praised the form of Marlon Samuels following the right-hander’s outstanding batting in the second Test which finished inside four days at Trent Bridge on Monday.

Samuels scored 117 in the first innings and returned to hit an unbeaten 76 in the second as the West Indies slipped to a nine-wicket defeat, to go behind 0-2 in the three-Test series.

“He’s come on this tour, he spoke to the board and was allowed to miss the Australia series,” Gibson told reporters.

“He came on this tour perhaps with a point to prove and he’s proven his point.

“He’s played fantastically well in the middle order. He and Shiv (Chanderpaul) have had a lot of work to do and he’s done that work exceptionally well.”

Samuels and captain Darren Sammy have been the only players to manage centuries for the West Indies in the series, both coming in the just concluded Test in a record 204-run seventh wicket stand.

Gibson said he was especially pleased for Sammy whose place in the side had been repeatedly questioned.

“He works very hard, he’s an honest cricketer and it’s always pleasing when that hard work pays off,” said Gibson.

“In his case, the amount of criticism he’s been getting even from some of our own people, makes it even more special for him.

“I was delighted for him as I was for Marlon as well. But we didn’t utilise the hard work they’d done.”

Trailing on first innings at Trent Bridge by 58 runs, the West Indies collapsed to 61 for six at the end of the third to virtually concede the game and it was only Samuels’ enterprise on Monday’s fourth day that helped the tourists to 165 all out and pushed the game beyond tea. (IANS)